Things to Do in Sultanahmet

Places to Visit and Things to Do in Sultanahmet, Istanbul

The most popular walking tours in Istanbul consist Sultanahmet and the nearby historical sites. As Sultanahmet was the administrative center for the Roman, Byzantine and Ottoman Empires, naturally the most important structures were built at Sultanahmet and around it.

In addition to the Great Palace of the Constantinople where the Byzantine Empire’s emperors resided and Topkapi Palace, where the Ottoman sultans lived, the most important churches and mosques of the past are also in this area.

In this post, you can find a short history of the major historical structures, most popular museums and the top places to visit at Sultanahmet area.

Furthermore, you can click the links below every subheading to find more detailed travel posts. Thanks to these posts, you can learn more about the Sultanahmet tourist attractions that you are interested in visiting.

Top Places to Visit in Sultanahmet

This magnificent structure that began to be built in 532 and finished in 537 was built by two important architects from Anatolia by Emperor Justinian’s order.

These two architects, Anthemius of Tralles (Aydin) and Isidore of Miletus (Milet) built the biggest structure that was seen by mankind till then. Therefore, Hagia Sophia fascinated both Emperor Justinian and the residents of Constantinople.

Places to Visit in Sultanahmet 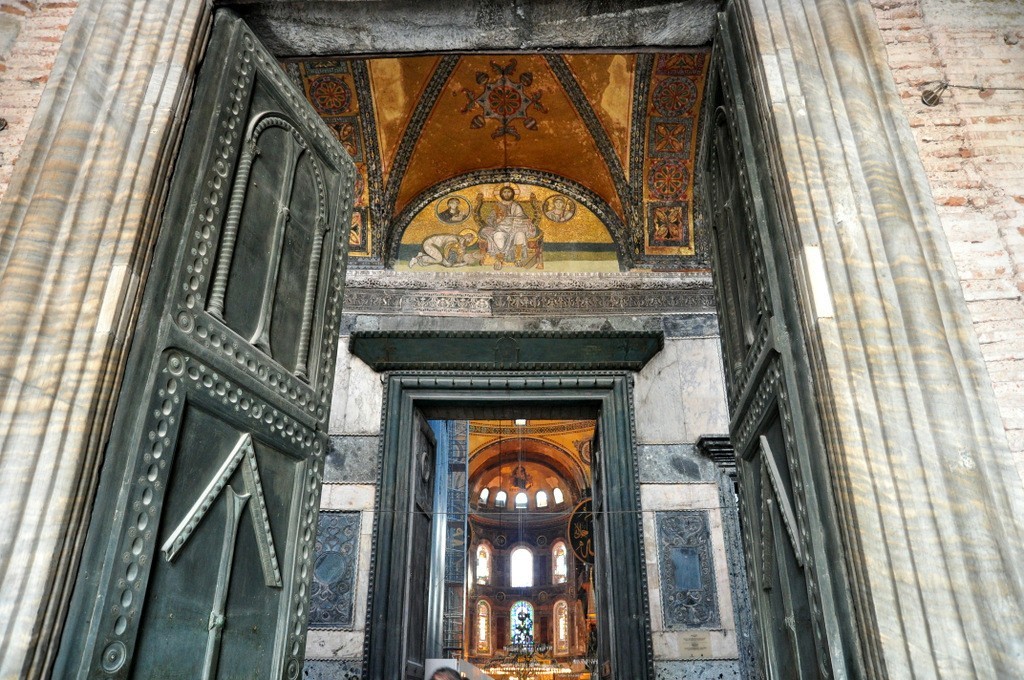 The Eastern Rome (namely the Byzantine Empire) became independent of the Western Rome by Emperor Theodosius’ decision in 395 AD. The Byzantine Empire is known as one of the longest standing civilizations which lasted until 1453, the conquest of Istanbul by the Ottoman Empire.

The Byzantine Empire faced big loses as well as great victories in its history. The worst loss known in its history is the Sack of Constantinople by Latins in 1204. The city was vandalized for 57 years and the Crusaders literally leveled the city with the ground.

When the Ottoman Sultan Mehmed II set his foot in Istanbul, he climbed up Hagia Sophia and watched the city. However, he was deeply disappointed by what he witnessed. The famous Constantinople of the Middle Age turned into nothing but a ruin.

As the Byzantine Empire didn’t have the funds to restore the city after the Invasion of the Latins, Istanbul was left wrecked. Even the legendary Great Palace of Constantinople was in ruin.

Mehmed II decided not to live at the Grand Palace which was built in Emperor Constantine‘s era. Therefore, he decided to build his own palace and Topkapi Palace was built on the remnants of the ancient Greek acropolis (Byzantium).

This mosque is known as Blue Mosque due to the fact that the interior of the mosque is decorated with invaluable, blue Iznik tiles.

This mosque was built by the famous Ottoman architecture Mimar Sinan’s student Sedefkar Mehmet Agha and it was finished only in 7 years between 1609 and 1616.

Blue Mosque is definitely one of the best best places to visit in Sultanahmet.

Best Things to Do in Sultanahmet 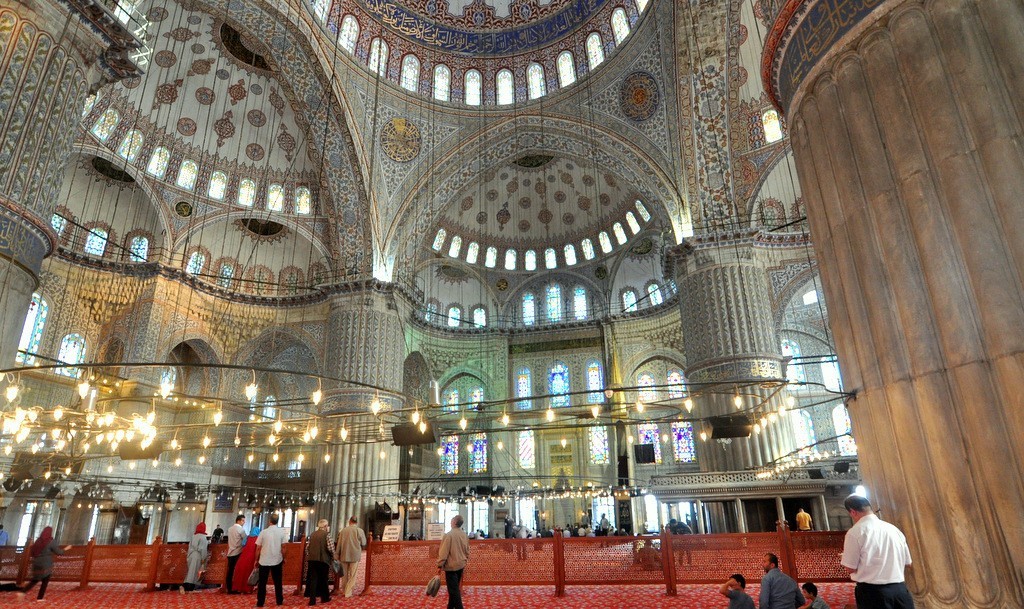 We know there were more than a hundred cisterns in Istanbul during the Byzantine era. The main reason for building so many of them is that the water sources were too scarce back then.

The city could manage itself during its first phase as an ancient Greek colony (Byzantium) due to the low population density. However, when the administrative center of the Roman Empire moved to Istanbul in the 4th century, the need to solve the water problem emerged due to the rising population.

Thanks to the aqueducts that Emperor Valens built in order to carry water from long distances, Istanbul didn’t have water shortage for ages. The Ottomans improved this system especially during Mimar Sinan’s period and these aqueducts were connected to the fountains.

As Istanbul is a peninsula and vulnerable to sieges, stocking water became a necessity. During the Middle Ages, Constantinople was sieged numerous times before Ottomans, but it stood against invasions thanks to its strong walls.

The townsfolk stayed alive by drinking water from cisterns during these sieges that sometimes lasted for months. Only a few of people know Istanbul has an underground city. Hundreds of cisterns and the tunnels that were connected to these cisterns in the Istanbul Historic Peninsula are waiting to be discovered.

Basilica Cistern is the most famous of them in Istanbul. This water depot built by the columns brought from an ancient Greek city is as beautiful as a palace.

Most Important Places to See in Sultanahmet 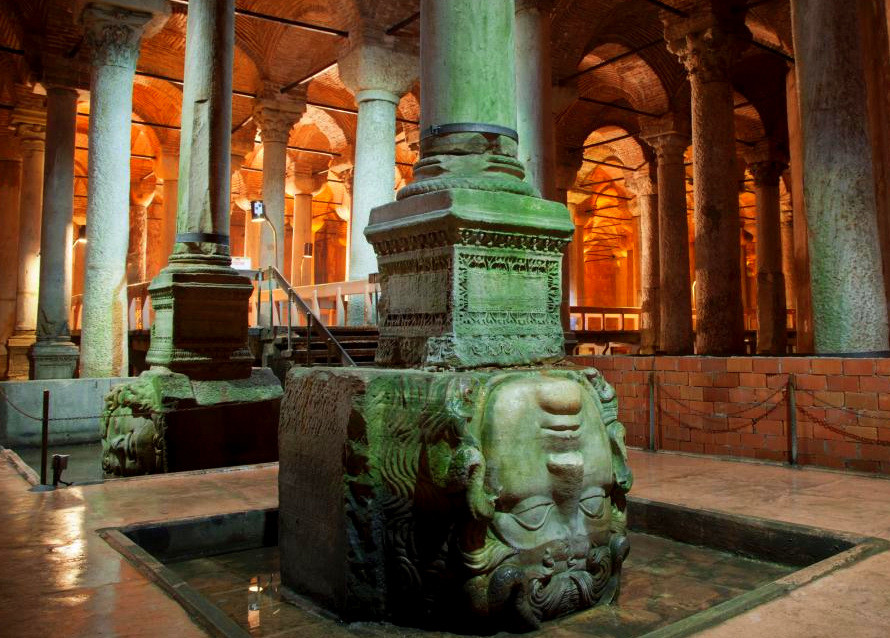 Hippodrome is the area where the oldest historical structures in Istanbul can be found. The 3,500 years old Egyptian Obelisk and 2500 years old Serpentine Column are at Hippodrome.

Hippodrome was built by Emperor Constantine and it was the main entertainment center of Istanbul during the Roman and Byzantine eras. The Emperor would join other spectators to watch the chariots racing with each other.

Since this area was where the people socialized the most, the revolts broke out here too. The Nika Riots that almost claimed Emperor Justinian’s life started here. 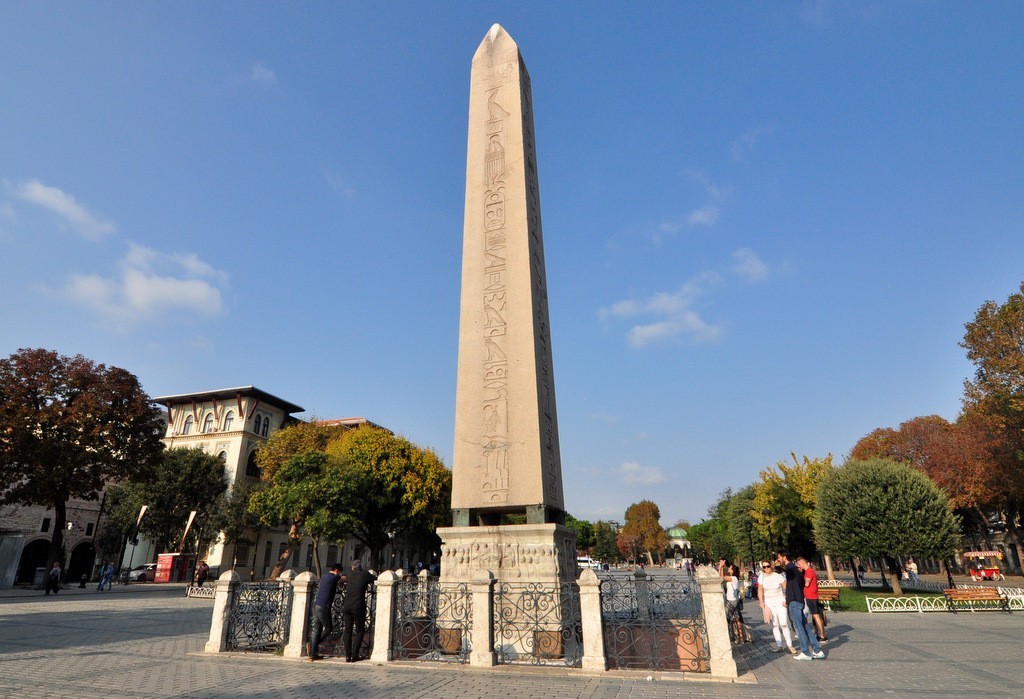 There are four people who stand out in terms of architecture in the history of Istanbul. These important figures who initiated the rebuilding of the city in different periods became the most prominent ones in Istanbul’s 2700 years old history.

Four Great Kings in the History of Istanbul

Little Hagia Sophia mosque plays an important role in history. This 1500 years old structure serves as a mosque today. However, it was originally a church dedicated to two saints of the Christian world and called Church of Sergius and Bacchus.

Little Hagia Sophia is known as “Kucuk Ayasofya” in Turkey. This secret gem of Byzantine Era, considered as one of the best places to visit in Sultanahmet Area.

Top Things to Do in Sultanahmet 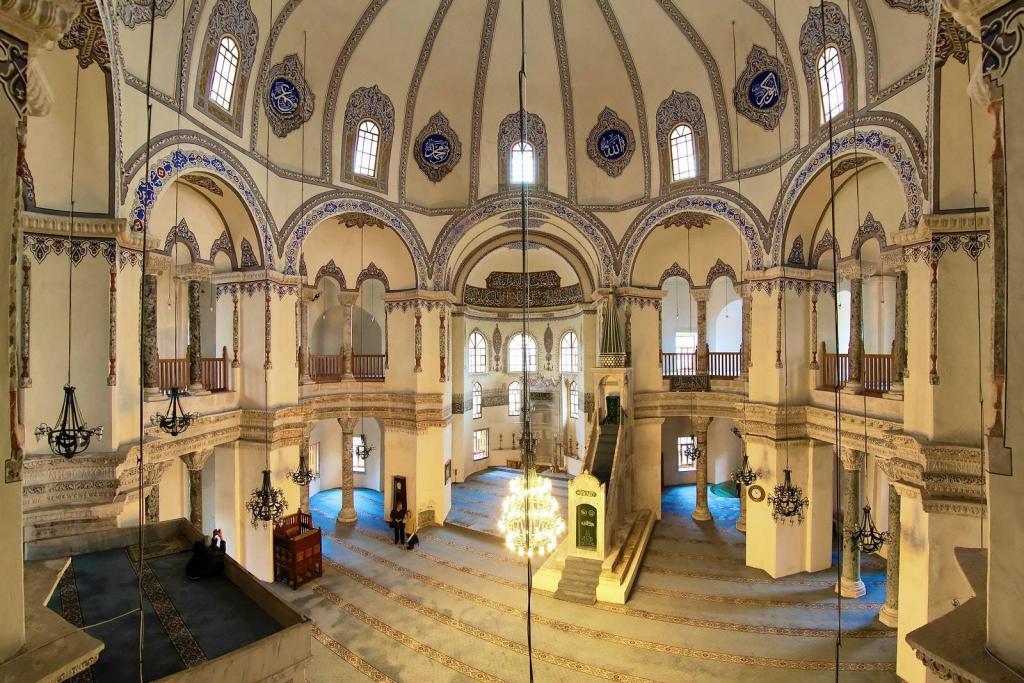 The Treaty of Kadesh, known as the first written treaty in the world, is preserved in this museum too. This treaty was signed by the Ancient Egypt and the Hittites that had power struggle over the lands in the Middle East.

There is another magnificent work of art in the museum named the Alexander Sarcophagus. Additionally, there are numerous ancient Greco-Roman statues and many other valuable historical works in the museum. Istanbul Archaeological Museum is regarded as one of the biggest historical collections in the world.

Considering how far the lands of the Ottoman Empire went on three continents, you can imagine how huge are the historical works that are preserved in this museum. Osman Hamdi Bey, known for his painting named “The Tortoise Trainer”, is the pioneer of the advance in archeology during the Ottoman era.

The Tiled Kiosk in the Istanbul Archeology Museum

One of the structures in the yard of the museum is one of the oldest kiosks of the Topkapi Palace. According to the rumors, three kiosks were built during Sultan Mehmed’s reign. These kiosks were in Persian, European and Turkish style.

The Ottomans wanted to symbolize their rule over Eastern Europe, Mesopotamia, and Anatolia with three different architectural styles. However, only the Tiled Kiosk, built in 1471, could survive. 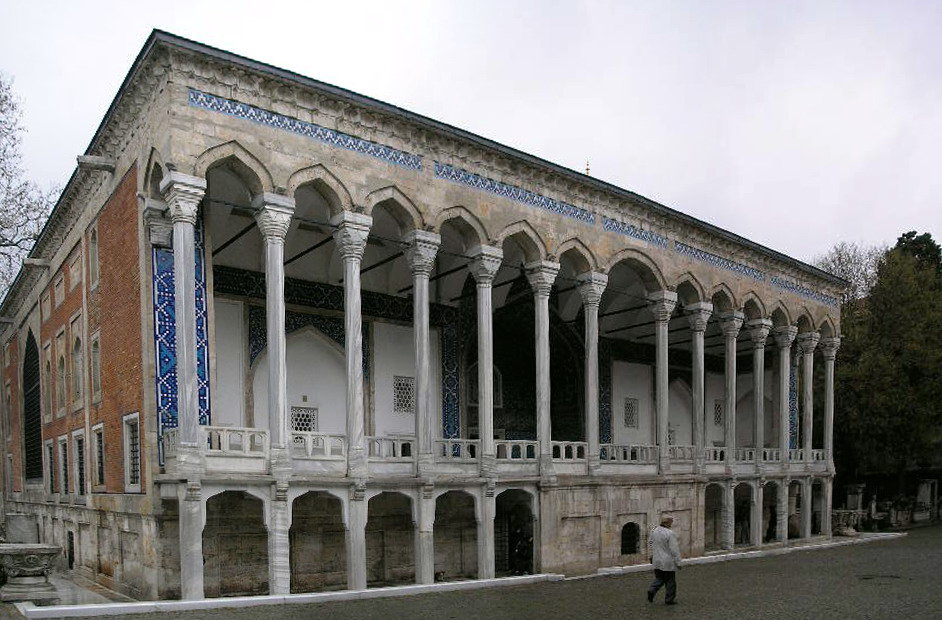 Hippodrome that we mentioned formerly surrounds two important historical structures. One of them is Blue Mosque in the east, while Ibrahim Pasha Palace is in the western side.

Ibrahim Pasha is also known as Pargali Ibrahim Pasha. While Sultan Suleiman was still a prince in the 16th century, Pargali Ibrahim was a young man who was receiving education at the Special School in Topkapi Palace. Brought to Istanbul by devshirme method, Pargali began to be called Ibrahim when he converted to Islam.

Pargali Ibrahim Pasha served Sultan Suleiman the Magnificent as his Grand Vizier (Prime Minister). Then, he got married to Sultan Suleiman’s daughter, Hatice Sultan, and became his son-in-law. The pasha ruled the state for long years, but he lost favor due to Hurrem Sultan’s influence and he was executed hastily.

The amazing palace built in his name serves as Turkish and Islamic Arts Museum today. In the collection of the museum, “Islamic Works” from the Caliphates period, the era after Prophet Mohammed’s death, can be seen.

In addition to these works, there are important historical works that shed light on the Turkish history. Especially Turkish carpets from the Seljuk Empire era are among the most striking works in the collection.

Places to Visit in Sultanahmet Map 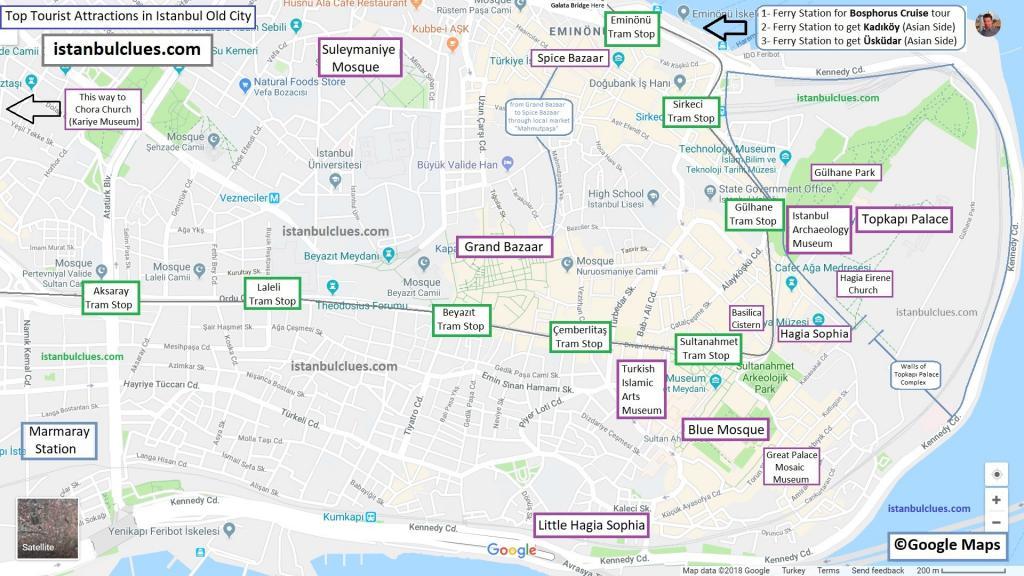 Places to Visit and See in Sultanahmet