Topkapı Palace is the best Ottoman Palace reflecting the origins of Turks in Central Asia. It was commissioned by Mehmed the Conqueror in 1460 and Ottoman sultans and royal family lived there until 1856.

A reflection of classical Ottoman architecture, Topkapı Palace fell out of favor in the 19th century because it was not considered suitable for state protocols and ceremonies. During the reign of Sultan Abdülmecid, Dolmabahce Palace, built on western style, started to be used so Topkapı Palace became “Old Palace” but it was not completely abandoned.

When the Ottoman Empire was stretched to three continents and reached its widest borders, strong monarchs like Suleiman the Magnificent was accommodating in this humble palace. The Palace consists of four large gardens and a structure immersed with nature. A visit to the palace takes 3 hours on average.

The 7-month period from April to November is Istanbul’s high tourism season. During this time, there are long ticket queues in front of museums such as Topkapi Palace and Hagia Sophia.

For this reason, I recommend that you buy a Topkapi Palace fast track ticket. This ticket is a bit more expensive than the standard ticket of Topkapi Palace. On the other hand, you can avoid waiting for a long time at the ticket office.

Those who have skip-the-line tickets meet with their guides at the door and enter with the group. Thus, you can listen to the history of the 500-year-old Topkapi Palace from a professional. You can use this link to get a guided entrance ticket to Topkapı Palace.

What to See in Topkapi Palace Museum

Topkapi Palace contains four courtyards. Ticket is not required to get into the first courtyard. Ticket offices located at the end of the 1st courtyard. (On the right side).

Here you may find an excellent description of the courtyards of Topkapı Palace from the first to the fourth.

Description: When you enter the First Courtyard from the monumental gate, the first thing that attracts the eye is the magnificent Bosphorus view. But don’t be hasty.

You will see even more beautiful sceneries within the palace. On the left side, there is a nice restaurant called Emirgan Sutis Restaurant. (Old Police Building). Just next to it majestic Hagia Irene Church, built at the same time as Hagia Sophia by Emperor Justinian.

First Courtyard provides a nice walking path covered with trees and flowers. When you approach the second monumental gate, you will see ticket kiosks on your right. With the spring coming, lines get longer and longer. You may also consider getting an Istanbul Museum Pass to avoid ticket lines.

Note: A passage to Istanbul Archeological Museum is to the west of this courtyard

Description: After you pass through toll gate and security point, you may look at the miniature models of the palace to understand the real size of the Topkapı Palace. The first model shows the complete palace complex and the second one shows the inner courtyards, the core of the palace.

Behind the models on the east side of the courtyard, you may see huge chimneys. These are the kitchens capable of feeding 3000 people a day. You may see inside video about Ottoman palace kitchen and distinguished Chinese porcelain collection.

The most distinctive place at the second courtyard is Tower of Justice and Imperial Council below it. The most important decisions about the empire stretching to three continents were taken here. In the grand vizier room, there is elegant hand-made clock collection.

The red brick room includes a weapon selection with collection from many centuries. The entrance to Topkapi Palace Harem Rooms is in this courtyard, just at the center of the western wing, next to the council. If you enter Harem here, you may get out at the third courtyard. 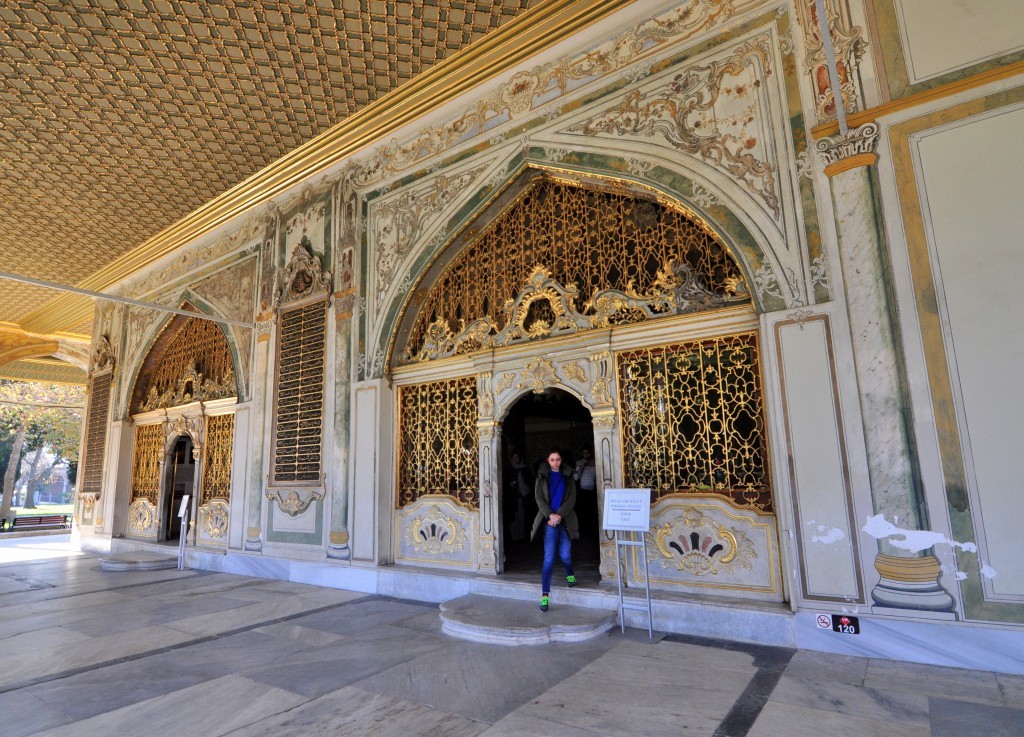 Description: The beautiful gate that can be seen while passing to third courtyard through the second one is the Gate of Felicity. At the entrance of the third courtyard is the Audience Hall where the sultan accepted the guests. Outfit selection and treasury ward can be seen on the right-hand side of the courtyard.

There are four treasury rooms. However due to restorations, it is seldom that four of them are open. Spoonmaker’s Diamond (Kaşıkçı Elması) and Topkapı Dagger (Topkapı Hançeri) are the most famous and valued items, which can be seen in Treasury IV room.

You may see Prophet Moses’ staff, Prophet David’s sword, hand of John the Baptist, mantle of Prophet Muhammad in the Sacred Relics room. (located on the left-hand side of the courtyard)

Famous “Topkapı Dagger” is in one of treasury rooms. The Topkapı movie released in USA in 1964. Peter Ustinov starred. In the story, a band of thieves try to steal the dagger from the palace.

Description: On the eastern wing of the courtyard, there is an incredible Bosphorus and Istanbul view in front of Mecidiye Pavillion. At the center of the yard, there is a wooden pavillion called Sofa Pavillion and a large garden. Sports competitions were held between palace dwellers in this garden.

In the western wing of the courtyard, there is a magnificent Golden Horn view and Baghdad Pavillion, Revan Pavillion and Summer Pavillion (Circumcision Room) can be seen here as well.

View of Bosphorus from Mecidiye Pavillion

View of Bosphorus from Topkapi Palace

The entrance fee to the Topkapi Palace is 72 Turkish Liras. You need to pay extra ticket price for sections such as Harem and Hagia Eirene inside the palace. Admission is free for children under 8 years. Istanbul Museum Pass is valid in all parts of Topkapi Palace.

The ticket price for the Harem Rooms of the Palace is 42 Turkish Liras. If you wish to visit Hagia Eirene Church in the first courtyard of the palace, you will have to pay an extra 36 Turkish Liras.

Topkapi Palace is full of tourists in summer. If you don’t want to wait in the ticket queues for long time, you can buy the Topkapi Palace skip the line ticket.

Fast track entry tickets sold by GetYourGuide are slightly more expensive than standard tickets. However, it saves you from waiting in the ticket queue and provides guide service. You can check “Topkapi Palace Skip The Line Tour” from this link.

Topkapi Palace is open to visit from 09:00 to 18:45 in the summer season. High season starts with the 1st of April and lasts until 2nd of October.

Topkapi Palace is open to visit from 09:00 to 16:45 in the winter season. Low season starts with the 2nd of October and lasts until 1st of April.

Please also note that Topkapi Palace ticket offices are closed 45 minutes prior to closing time. Last entry time is 18:00 in the summer season and 16:00 in the winter season.

A visit to Topkapı Palace might be a bit tiring. Therefore it is recommended to visit the palace in the morning, even at the time of opening at 09:00. In this way, you will not be stuck in the lines at the entrance of the palace and treasury and you will be able to enjoy the calming atmosphere with your fresh energy.