Towards the end of the Ottoman Empire, in the 19th Century, the Westernization movement was powerful. For the Ottoman people who lived in Istanbul Old City, “Europe” was in the northern bank of the Golden Horn.

Life quality in the other part of the city surpassed the Historical Peninsula after Ottoman Sultan Abdulmecid left Topkapı Palace in 1856 and moved into Dolmabahce Palace, which was built in the western architectural style.

While Muslim population in the Historical Peninsula was living a modest and conservative life, Pera (Beyoglu) quarter was regarded as Paris of the East due to parties, balls and art events held there.

In this period, luxurious hotels like Pera Palace, gorgeous mansions and banks were built and elegant shops & restaurants opened. The cultural richness of this period can best be seen in Grand Rue De Pera, today known as Istiklal Avenue. Beautiful consulate buildings, mansions, hotels and restaurants are still there.

Pera began to be occupied by foreign settlers. Italian, French, Orthodox Greek, Armenian and Jewish people settled there. Eventually Istanbulites began to call the “Pera” as Constantinople due to its western lifestyle.

The 7-month period from April to November is Istanbul’s high tourism season. During this period, there is a long ticket queue in front of popular museums.

Those who have skip-the-line tickets meet with their guides at the gate and enter with the group. So you don’t wait in line and listen to the history of the Dolmabahce Palace from a licensed tour guide. You can use this link if you want to buy an fast track entry ticket to the Palace.

“Dolma” means filled or stuffed and “Bahce” means garden in Turkish lenguage. The site of the Dolmabahce Palace was obtained by filling the small bay on the Bosphorus giving the palace its name.

The palace’s equipment implemented the highest technical standards of its age. Gas lighting and water-closets were imported from Great Britain, whereas the palaces in Europe were still lacking these features at that time. Later, electricity, a central heating system and an elevator were installed.

During the Turkish Republic time, the palace was used for foreign statesmen and democratic cultural activities.

Founder of the nation, Mustafa Kemal Ataturk, occupied a room at the palace on his visits to Istanbul and died there in 1938. His room is visited by millions of Turkish people annually.

Financial Crisis In The Ottoman Empire

The construction of the palace was at a time when the economy of the Ottoman Empire was not at all good. This difficult situation was not taken into consideration while construction. The materials used at the palace were very expensive and imported from different countries.

The reception hall with its five and a half-ton English chandelier, the hamam and the crystal banisters are of outstanding importance in the palace.

Great View From The Bosphorus

The Dolmabahçe Palace is an impressive building facing the sea with very high walls on the side facing inland. The main building is surrounded by magnificent palace gardens. There are nine gates on the inland side, two of which are monumental. On the front facing the sea there are five gates.

The palace was intended to be symmetrical in plan and decoration which was not something new. However with this palace the focal point is the sea. The building was constructed to be seen from the sea and it is this feature which is new and unique in Ottoman Architecture.

Gate Of The Sultan

The entrance fee of Dolmabahce Palace is 60 Turkish Liras as of 2020. If you want to visit the Harem section, you will have to pay 40 TL extra. The fee for the combined ticket including the Palace, Harem and Clock Tower is 90 TL. The ticket price includes an audio guide system.

After receiving the ticket you will see the turnstiles at the entrance of the palace. You can get a free audio guide system from the office on the left before you pass the turnstiles.

Dolmabahce Palace is usually crowded. You spend long time waiting in the lines. You may consider guided tour with skip the line tickets. You can check Dolmabahce Palace: Entry with a Licensed Guide here.

Istanbul Museum Pass is not valid at Dolmabahce Palace

Istanbul Museum Pass is a product sold by the Ministry of Culture and Tourism. It is valid in Istanbul’s most important museums, such as Topkapi Palace and Hagia Sophia.

However, the museum card is not valid at some museums such as Dolmabahce Palace, Beylerbeyi Palace and Yildiz Palace. These three palaces are run by Directorate of National Palaces.

How To Get Dolmabahce Palace from Sultanahmet Old City?

If you are staying in the Istanbul Old City (Beyazit, Sultanahmet, Sirkeci, Eminonu). You can take the Tram T1 in the direction of KABATAS. The Dolmabahçe Palace is within 5 minutes walking distance from Kabatas Tram Station (Terminal Tram Stop)

First take the tram in the direction of “Kabatas” from Sultanahmet 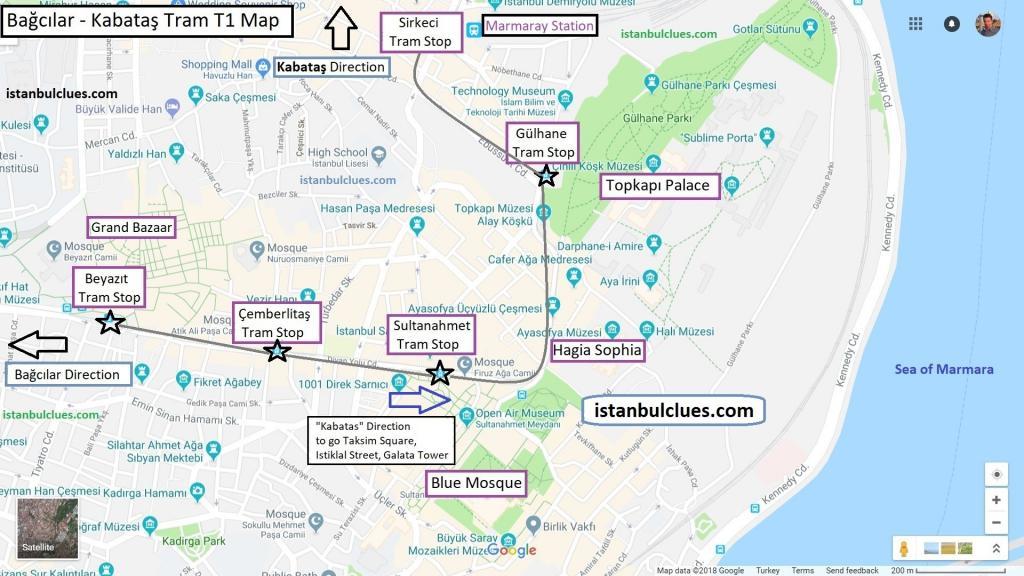 Tram crosses the Galata Bridge and arrive to Kabatas 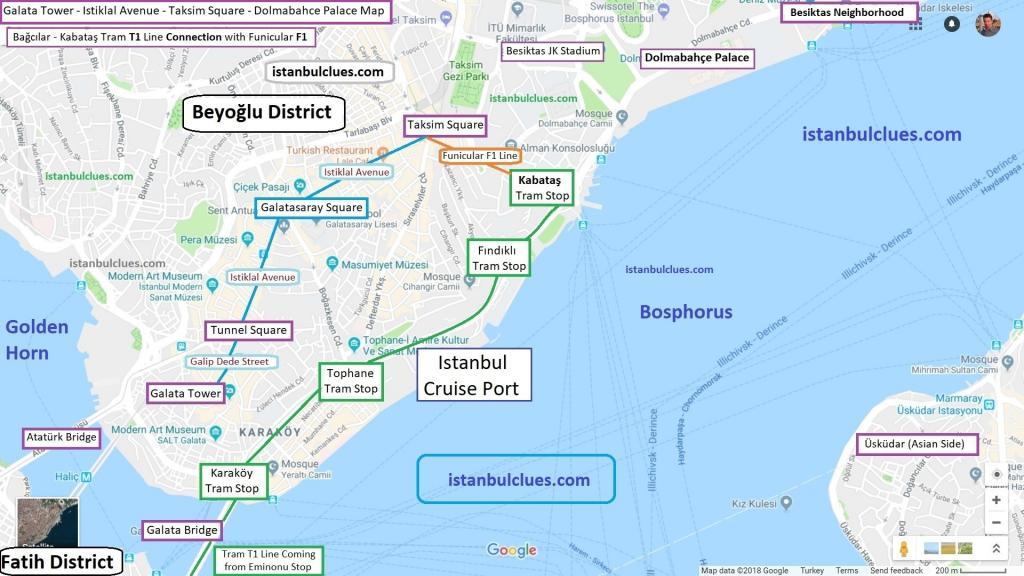 Getting Dolmabahce Palace by Tram