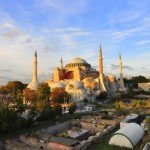 The city of Istanbul had three different names throughout history. In the past, it was known as Byzantium as a Greek colony. After the Roman emperors settled in the city, its name became Constantinople. Ottomans continued using “Konstantiniyye”, Turkish version for Constantinople, for years. The name Istanbul has become the official name of the city since very recently. In this … END_OF_DOCUMENT_TOKEN_TO_BE_REPLACED 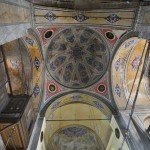 The first three churches of Constantinople, Hagia Eirene, Hagia Sophia and the Church of the Holy Apostles have not survived in their original form. Therefore, our knowledge of the early Byzantine Churches in Istanbul consists of what we know about the early Christian churches. The first churches of Christianity were inspired by the Basilica, an ancient Roman … END_OF_DOCUMENT_TOKEN_TO_BE_REPLACED 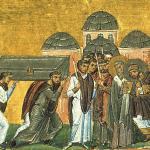 The Church of the Holy Apostles was the second largest church in Constantinople (Istanbul) during the Byzantine period. The most important emperors in Byzantine history were buried in this church. The church dedicated to the Holy Apostles was destroyed during the Ottoman period and Fatih Mosque was built in its place. In this article you can find information about the … END_OF_DOCUMENT_TOKEN_TO_BE_REPLACED

In the early years of Christianity, Anatolia was one of the regions where the apostles spread Christianity. For this reason, ancient cities of Anatolia such as Ephesus and Antioch are on the pilgrimage route of Christians. Another place that Christians want to see in Turkey is Cappadocia and its cave monasteries. These monasteries are from the Byzantine period when monastic … END_OF_DOCUMENT_TOKEN_TO_BE_REPLACED

The Tetrarchy symbolizes a transitional period in the Roman Empire. The Tetrarchy (Rule of Four) was brought by Diocletian and put an end to ciwil wars in Rome for a while. However, this new system caused more wars afterwards. It may be surprising to come across such a detailed article on Tetrarchy in an Istanbul blog. However, the road to the establishment of Constantinople … END_OF_DOCUMENT_TOKEN_TO_BE_REPLACED

As someone who tries to specialize in the history of Istanbul, I need to open a special title for the people I frequently come across. St. John Chrysostom, as one of the people who marked the fourth century, draws attention with his passionate character and dedication. Since St. John has an important reputation in the Christian world, it is worth mentioning the situation of … END_OF_DOCUMENT_TOKEN_TO_BE_REPLACED

Byzantine Iconoclasm was the result of theological oppositions that started in the first years of the empire and continued for centuries. Constantinople had followed the Orthodox view established at the Council of Nicaea, but this later changed. The Byzantine people were divided into Orthodox and Monophysite sects. These two sides had different interpretations of the nature … END_OF_DOCUMENT_TOKEN_TO_BE_REPLACED

Sultan Suleiman ruled for 46 years when the Ottoman Empire was at the height of its power. The series "Magnificent Century", about Sultan Suleiman's wife, children and sisters, was watched by millions of people around the world. Sultan Suleiman's father was Selim I (the Resolute). Although Selim was the ruler for only 8 years, he had conquered important lands in the history … END_OF_DOCUMENT_TOKEN_TO_BE_REPLACED

Anatolia has hosted many civilizations throughout history. Serving as a bridge between Asia and Europe, Anatolia has been an important trade and cultural center throughout its history. In this article, you can find facts about the history of Anatolia, also known as Asia Minor, along with maps. The Hittites stand out as the oldest and most powerful empire in the history of … END_OF_DOCUMENT_TOKEN_TO_BE_REPLACED

We can say that Sultan Mehmed the Conqueror has a special place in Ottoman History, even more than Suleiman the Magnificent. Because Mehmed II's reforms enabled the Ottoman Principality to transform into a multinational empire in the coming decades. Mehmed was an extraordinary person embodying the ideals of a Renaissance prince and imperial passion, both of which made him a … END_OF_DOCUMENT_TOKEN_TO_BE_REPLACED