Kebab holds a really important place in Turkish kitchen. Kebap culture dates back to centuries ago and kebab menus have become richer thanks to the creative chefs who come up with new recipes, such as “Pistachio Kebab”.

Adana Kebap is one of the first kebab types that comes to mind when speaking about kebab and its history dates back to the beginning of the 1900s. On the other hand, indispensable kebab types of Gaziantep kitchen, such as Eggplant Kebab and Ali Nazik Kebab, have spread to all around Turkey in years.

In this post, I’ve made a list of the best kebab places in Istanbul. I hope it will guide the visitors find different Kebab types and enjoy them in Istanbul.

Develi Kebap was opened in 1912 in Samatya and it has already 11 branches in Istanbul today, some of which are at Kalamis, Etiler, and Florya. Develi Kebap comes up with special Gaziantep kebab recipes, a tradition introduced by its founder Arif Develi and still maintained by his successors. One of the inventions of Arif Develi is “pistachio kebab” that I mentioned above.

Apart from the classical dishes of Gaziantep kitchen, you can also find local cuisines from the Aegean, Mediterranean and Central Anatolia at Develi Restaurant.

Moreover, Develi Kebap’s Tuzla Viaport Marine Corner branch on the Asian Side is the first restaurant that Develi Kebap adopted the fast-food concept.

Develi Kebap is so good that it was chosen as one of the “Best 100 Restaurants in the World” by the Observer in 2006. 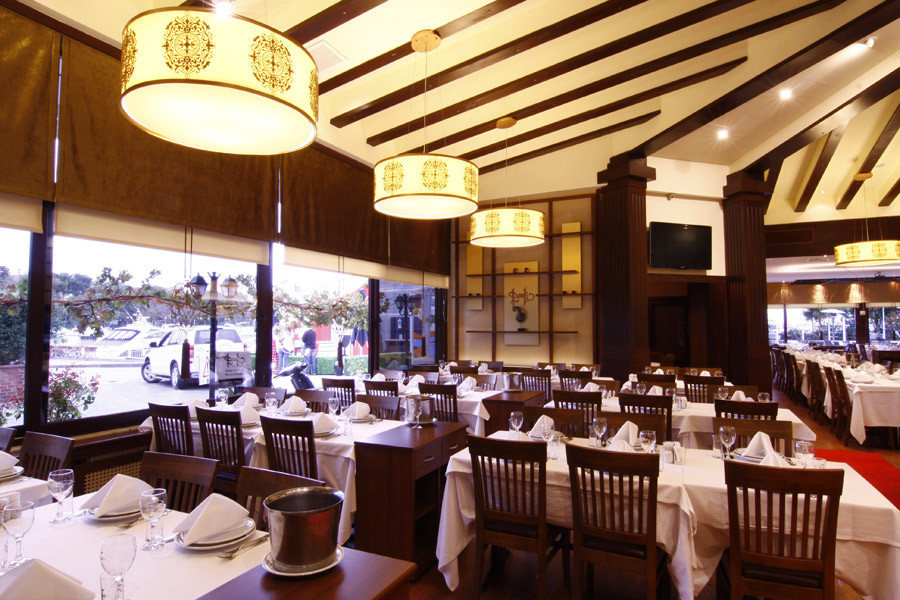 Gaziantep Burch Ocakbasi not only brought the most special Gaziantep dishes to Grand Bazaar, the heart of the Old City, but also has managed to be included in the “recommended kebab restaurants” lists in tourist guidebooks.

In addition to the delicacies from Gaziantep kitchen, you should definitely try stuffed dry eggplant and stuffed dry pepper as well as kunefah at Gaziantep Burc Ocakbasi. 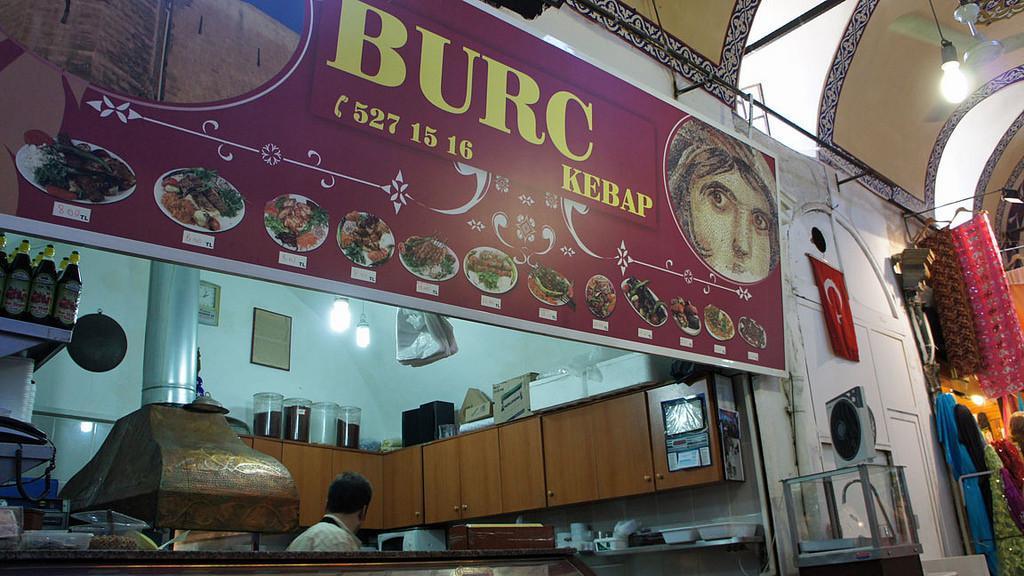 Umut Ocakbasi has been in service on the backstreets of Beyoglu since 1976. It’s where fruits and vegetables are supplied daily and the meat is processed in semi-auto machines prior to cooking. Therefore, some appetizers like gavurdagi salad (tomato salad with cumin and walnut) are always fresh at Umut Ocakbasi.

Some other appetizers you can find at Umut Ocakbasi are eggplant ezme (ezme is a tomato dip with pepper, onions, olive oil and some other ingredients), eggplant salad, pepper with tomato. And these appetizers go very well with your kebab.

Moreover, turnip juice, an indispensable drink that goes perfectly with kebab is brought from Adana in special barrels. 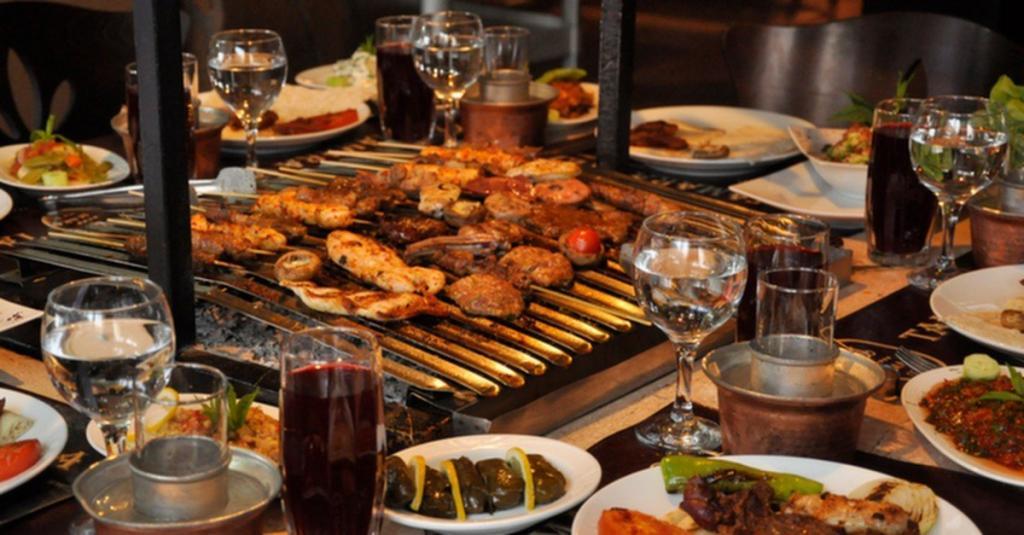 Although Oz Kilis Kebap is famous especially for its gavurdagi salad, kibbeh, and lahmacun, its kebab options are truly delicious and worth trying.

It’s located in Fatih, a historical neighborhood of Istanbul, and you are recommended to try oruk (a different version of kibbeh), shiveydiz (stewed lamb with fresh green onions and garlic in a yogurt sauce), lebeniye (Turkish soup with meatballs), and stuffed dried eggplant.

You should also try amazingly delicious ayran with foam served in a copper glass alongside your kebab. 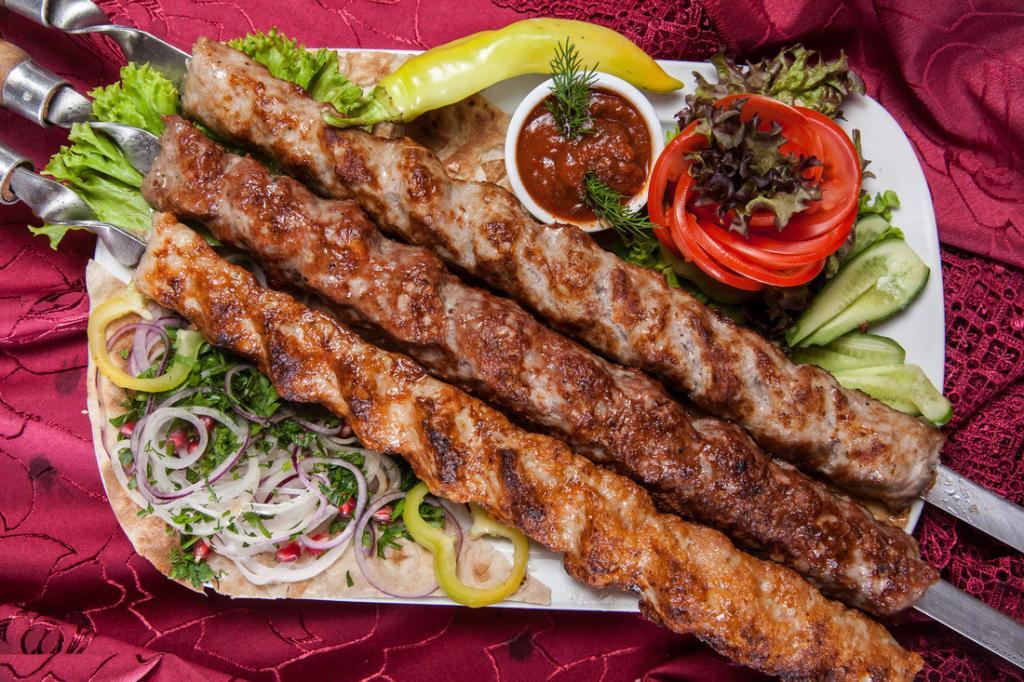 Adana Ocakbasi is located at Kurtulus neighborhood in Sisli and its motto is “The right address for kebab”. Here, you can have your kebab and appetizers, cacik (Turkish yogurt with cucumbers and herbs), and eggplant salad with yogurt. 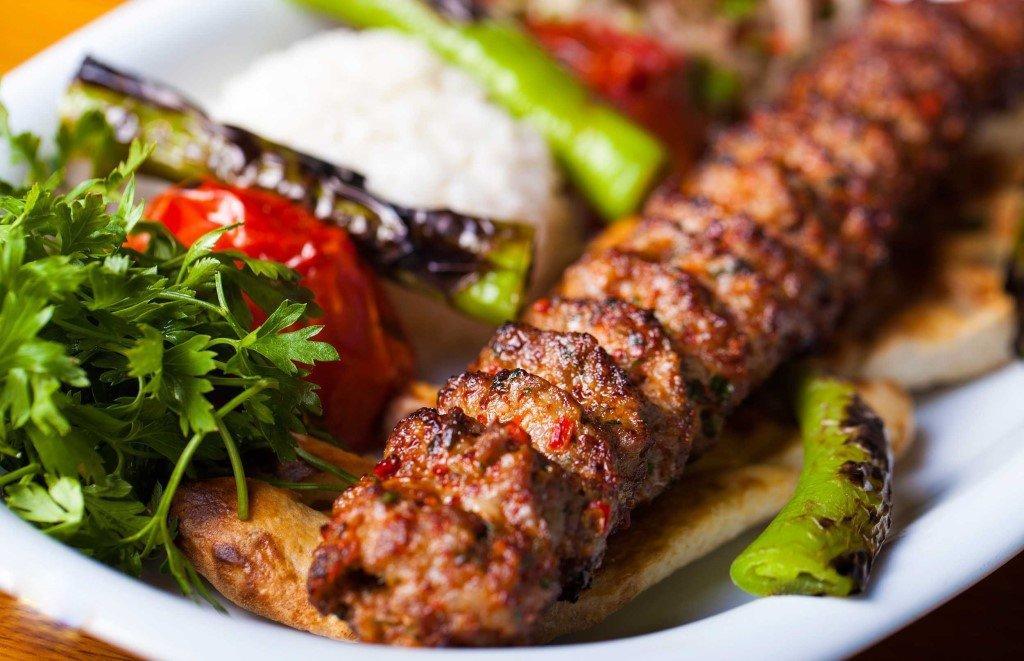 There are four branches of Kasibeyaz in Istanbul and one other branch in Ankara. There are a lot of kebab options at Kasibeyaz, such as Ali Nazik, pistachio kebab, garlic kebab, onion kebab, and abagunnus (grilled eggplant with yogurt, olive oil, and chili pepper).

You are highly recommended to have yuvalama soup (a Turkish soup that includes meatballs, chickpeas, tomato, and bulgur) and Gaziantep style lahmacun before your main course. And after your meal, you should try a famous Gaziantep dessert named katmer (qatlama).

Kasibeyaz, especially Florya branch, is one of the best kebab restaurants on the European side of Istanbul. 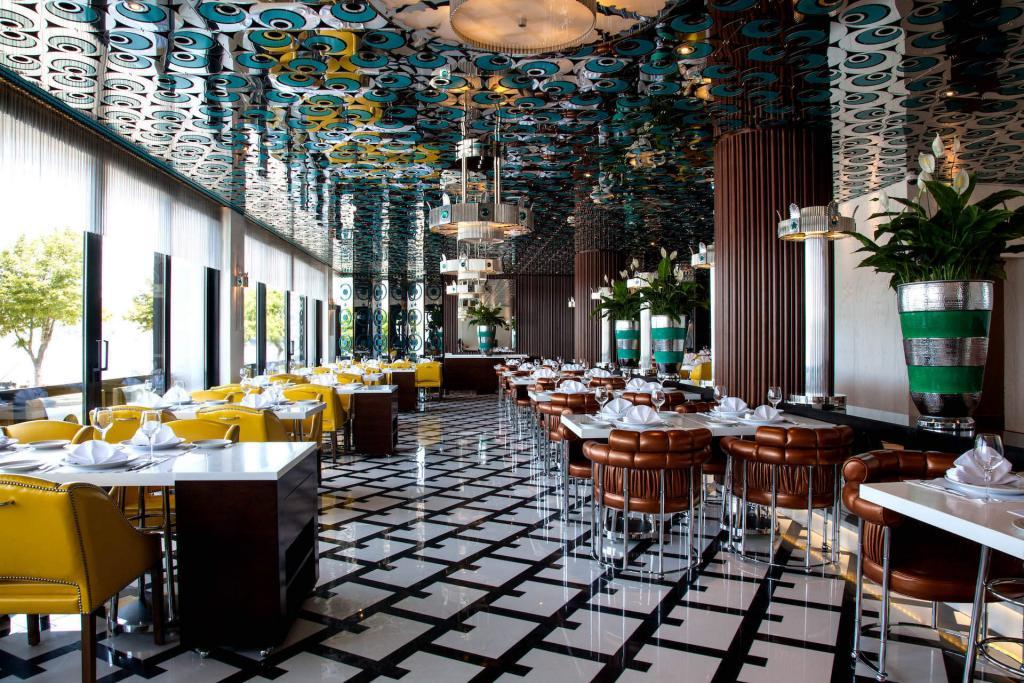 Originally from Adana, Yuzevler Kebap has three more branches in Istanbul, which are at Etiler, Maslak, and Goztepe. It’s one of the first places that comes to mind when you want to eat Adana kebab that is made of knife-cut ground beef. Also, you can taste food that is cooked in the oven such as Arap tava or wing tava.

Yuzevler Kebap offers a rich variety of salad options like tablaci (tabbouleh salad without bulgur) salad, harman (salad made of broccoli, cauliflower, peas, carrot, chickpeas, beans, olive oil, and spices) or the specialty of Yuzevler Kebap, Yuzevler salad. Moreover, chef’s special sushi kebab is an interesting choice if you want to go for an alternative. As starters, you are recommended to try Adana style small lahmacun or boiled stuffed meatballs.

Where to Eat Kebab in Istanbul? 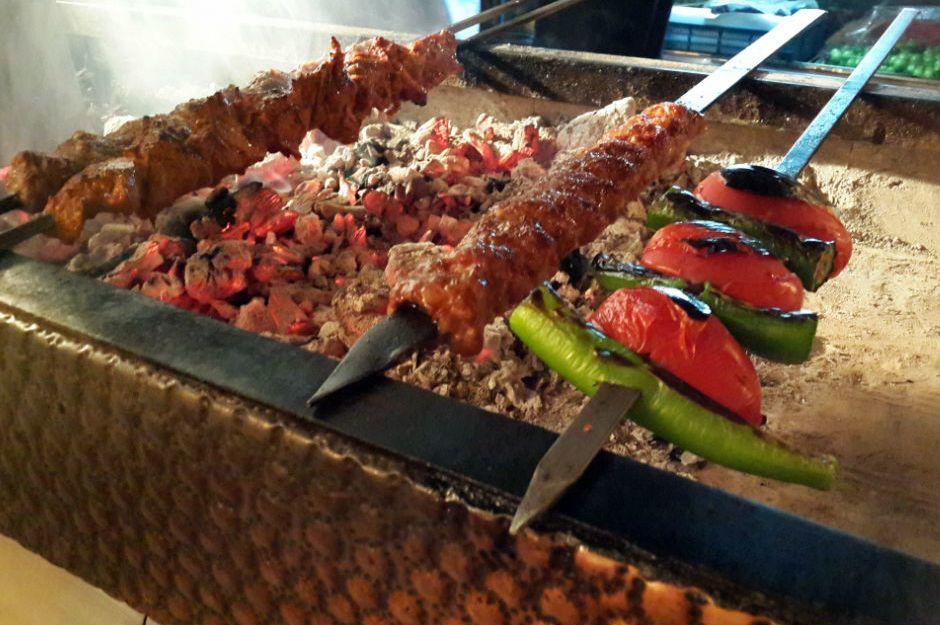 You can have really delicious Adana and Urfa kebab at Emin Baba Durum Evi. And the good news is if you order your food on a plate, salad, spicy ezme, eggplant ezme, and mixed pickles are served free of charge.

Emin Baba opened its first shop at Gulbag in a small place in 1999. After it became popular, a new place was opened on Ortaklar Street in 2008. Then, he moved to a bigger place in the same area and opened another branch in Beykent. Kebap is cooked in coal and oak coal and the taste of kebab is always great here. 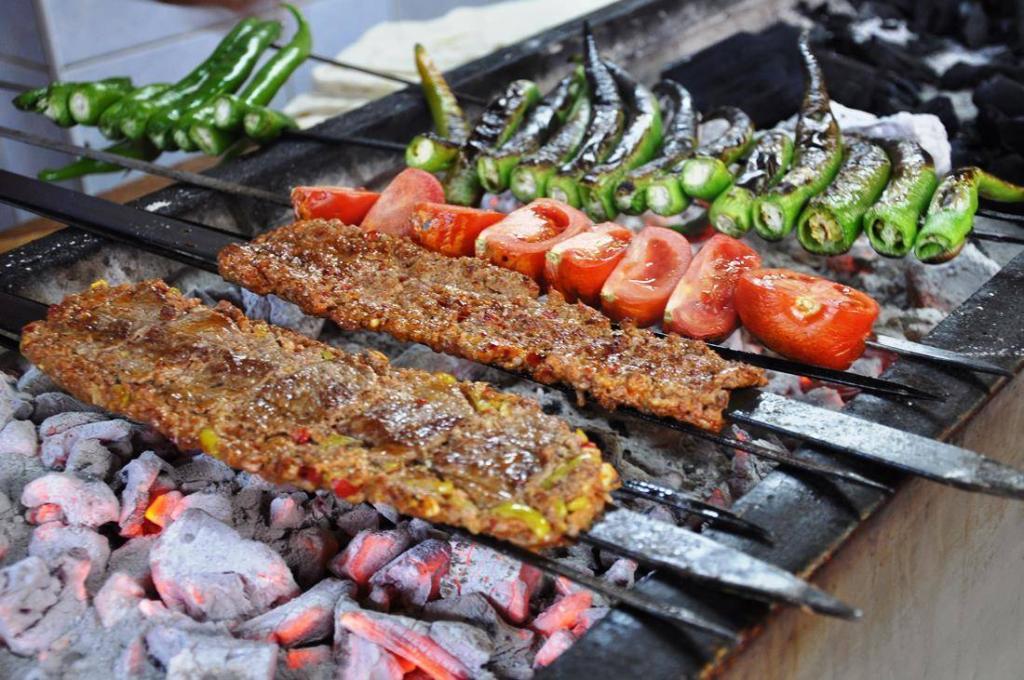 Originally opened in the center of Eminonu, Hamdi Restaurant has two more branches in Istanbul, which are at Radisson Blu Sisli and Pera. Hamdi Arpaci, who moved to Istanbul from Sanliurfa in the end of 1960s, started the business as a street vendor in Eminonu now owns the five floors of the building where he serves his customers.

There are 17 different kebab types in Hamdi Restoran’s menu such as Birecik kebab and opium poppy kebab. As for appetizers, you can find haydari (thick yogurt with garlic and dill), hummus, ezme salad, and eggplant in tomato sauce.

Walnut baklava, pistachio kanafeh, carrot-like sliced baklava, square baklava, sobiyet (dessert filled with cream, which is made from milk and semolina, and nuts), Hamdi’s special, and katmer are among the rich dessert menu at Hamdi Restoran.

It will be a privilege to have your kebab while you enjoy the Golden Horn and Bosphorus view at Hamdi Restoran. 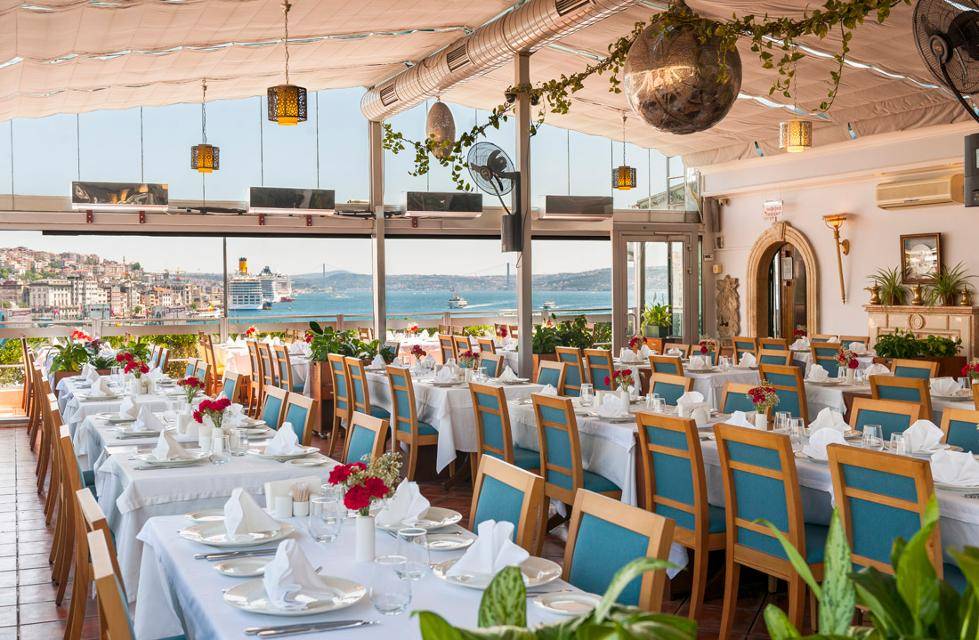 Kebapci Emin Usta has been serving his customers at its shop in Karagumruk. The meat that is used to make kebab is brought from Afyon and Balikesir and it’s chopped manually with a big knife. Emin Usta’s shop is a shabby but a famous one. Ayran made from ‘’Eris Yogurtlari’’, the natural yogurt maker of Fatih neighborhood, is also a popular choice to drink alongside kebab.

And Kebapci Emin Usta is one of the best traditional kebab restaurants in Istanbul.

Ciya Kebap is located in Kadikoy’s most active area, Fish Market. Ciya is one of the first places that comes to mind when people want to eat kebab in Kadikoy and it has more than one restaurant on the same street.

Its “Ciya Sofrasi” restaurant on Gunesli Bahce Street offers delicious appetizers and dishes of the Anatolian kitchen, while “Ciya Kebap” is a restaurant where you can taste amazing kebabs.

A lot of kebab choices can be found in Ciya Kebap’s menu and you can have both some great kebab and delicious local appetizers prepared with wholly organic ingredients.

With its food quality and high standards, Ciya Restaurant is regarded as the best kebab restaurant in Kadikoy in the most famous tourist guide books. 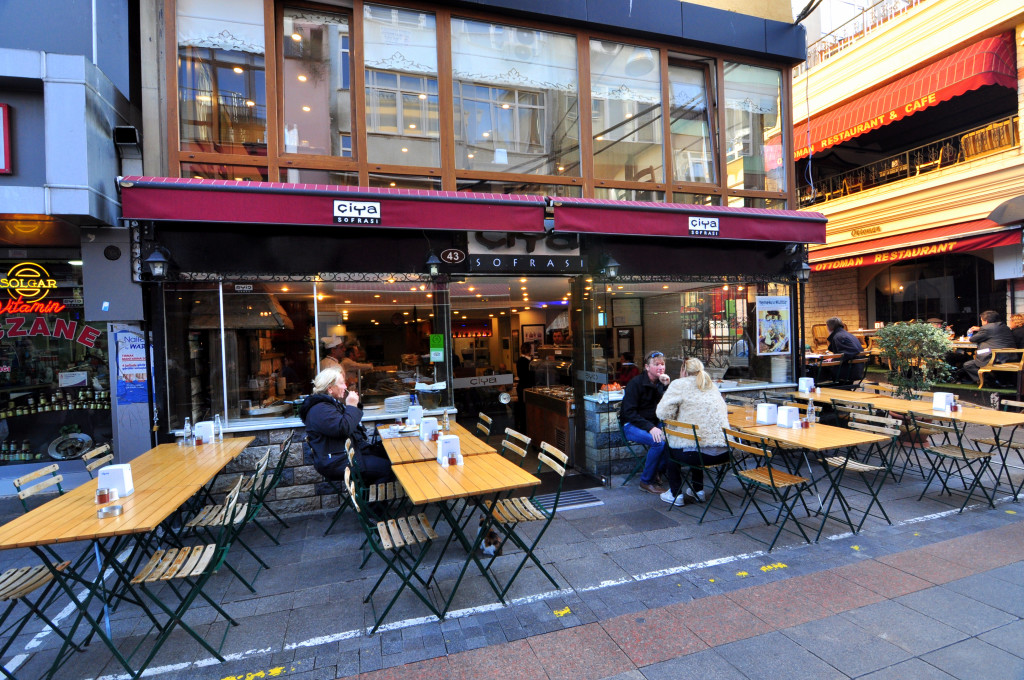 Canak Kebap is a restaurant where you can taste the local dishes of Gaziantep and it was opened at Acibadem in 2014. Adana kebab is named as “Canak Acili Kebap” in this restaurant. And it’s a special kind of kebab you can only find here. It’s a type of kebab that’s rolled in a pita bread. You should also note that tulum cheese, butter, green olives, radish, and rocket are served free of charge at Canak Kebap ve Katmer.

It will be a tough challenge to make a choice among many great kebab options such as oruk kebab (kebab made of lamb and veal) or Halep isi (Adana kebab served with thin skewers). And famous Gaziantep pistachios are served at the end of your meal in this restaurant.

Therefore, Canak Kebab ve Katmer is one of the best kebab restaurants on the Asian side of Istanbul. 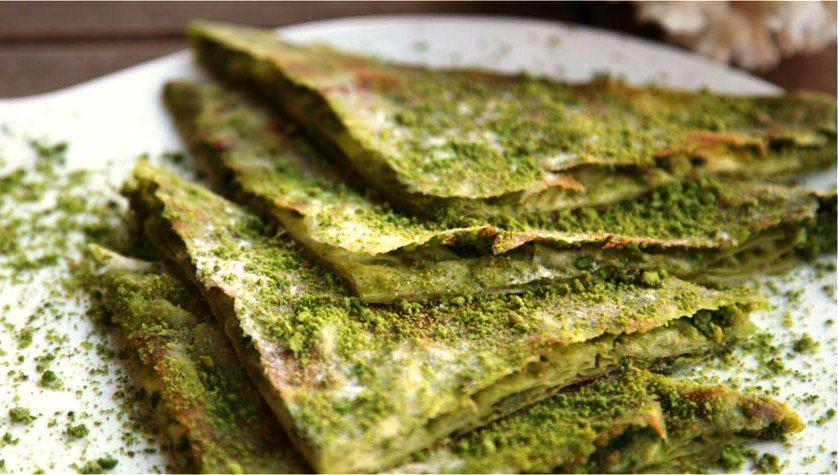 Mabeyin is another important representative of Gaziantep kitchen in Istanbul and Gaziantep kebab choices are served in a traditional way at this restaurant. Some of the items such as eggplant kebab, pistachio kebab, Mabeyin sarma, and plum kebab are the best options to go for at Mabeyin Restaurant.

Apart from kebab, you can have “Antep Kahvaltisi” (open buffet Gaziantep style breakfast) on Sundays. This place offers a very different concept from many other modern breakfast places in Istanbul and it’s highly recommended as this breakfast offers original and local breakfast experience in an equally original atmosphere.

Also, there are some other options apart from kebab that you can have at Mabeyin Restaurant. Yuvarlama soup, sour small meatballs, cig kofte (raw meatball), lahmacun, and kibbeh are some other local delicacies you can go for.

And if you wish to have a sweet end to your meal, you can have Cavusoglu Baklava, a 30 years old brand, and some other special desserts at Mabeyin Restaurant.