Known as Great Seljuk Empire, this state was declared the protector of Islam by Abbasid Caliphate who was living in Baghdad and it ruled over the holy lands. As the ancestors of the western Turks, they had blended the cultures and created the hybrid ethos that you can still observe in modern Turkey.

The Abbasid Caliph in Baghdat, granted Seljuk’s leader Tuğrul (Tughril), the impressive title of King of the East and West designating the Seljuk warlord as his temporal deputy.

Alp Arslan (Successor) expanded significantly upon Tughril’s holdings by adding Armenia and Georgia (1064). Invaded eastern fringes of the Byzantine Empire (1068) The war between Seljuks and Byzantine was inevitable then. 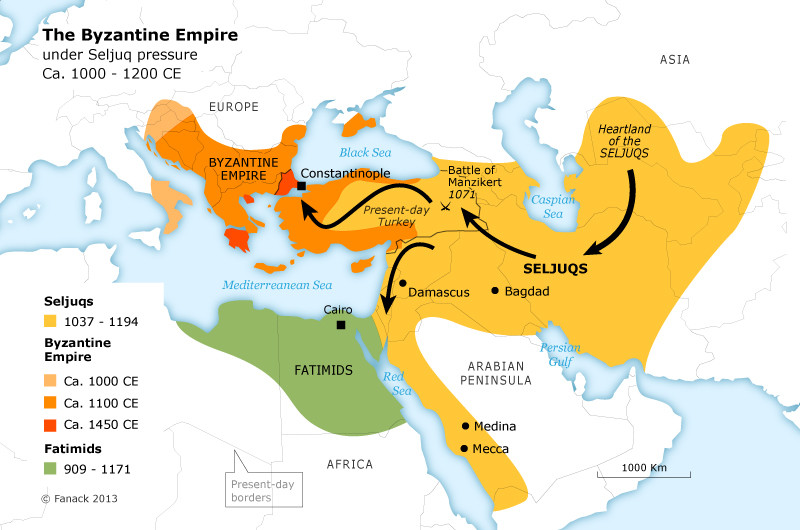 Seljuk Empire Map Depicting the advance from Asia to Anatolia

The map depicts the march of Seljuk Turks from Central Asia to the Eastern borders of Byzantine Empire. Batlle of Manzikent also marked in the map. That battle opened the gates of Anatolia (Asia Minor) to the Turks.

Clash of the Empires: Battle of Manzikent

In 1071 this Seljuk force faced the armies of the Byzantine emperor Romanos IV Diogenes at Manzikert (Malazgirt) north of Lake Van.  Byzantine legions outnumbered the Seljuk forces. However Seljuk Ruler Alp Arslan used extremely effective tactics. Seljuk cavalry surrounded the shaking Byzantine army and defeated decisively. They also taken Emperor Romanos war prisoner. Surprisingly, Seljuk Sultan did not drag the emperor after himself to his capital. He treated Romanos well and released him for a ransom and huge tracts of Byzantine land. 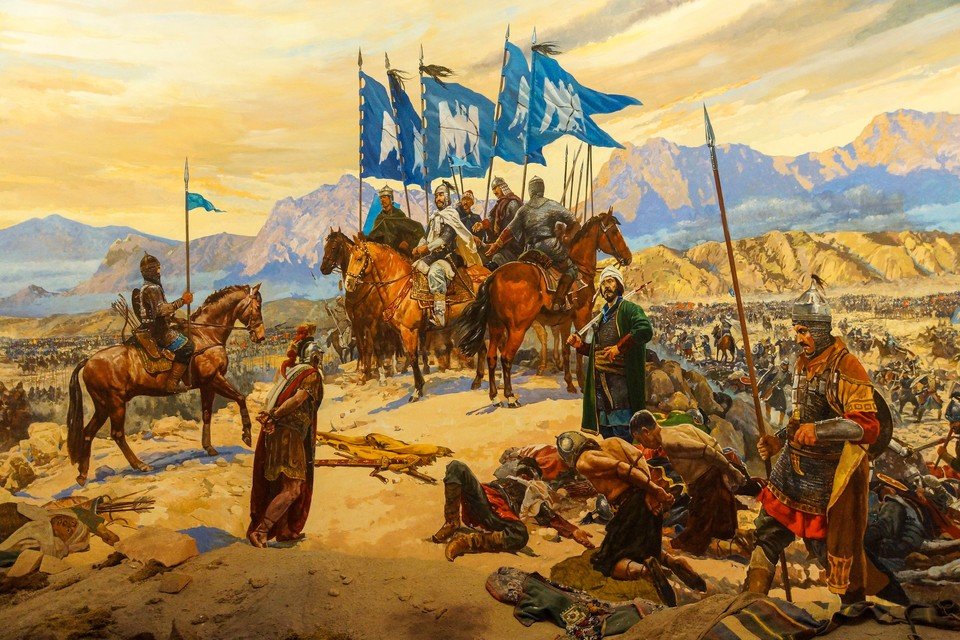 Rise and Fall of Great Seljuk Empire of Turks

The fact that Alp Arslan won the Battle of Manzikert cracked the Byzantine defense completely. Before Byzantine Empire found time to get on their feet, Seljuks had already captured Eastern and Central Anatolia.

The reigns of Alp Arslan and his successor Malik Shah, were the prosperous years of the Seljuk Empire. There was a strong central government, ruled by the emperor and his wise man council. Emperor had to take the advice of the elderly people in the council. This is a tradition that had existed from the times of Central Asian Turks.

The state economy was strong due to the strategic position of Seljuk Empire. They were dominating the keypoints on the major trade routes of the World: Spice Route and Silk Route. They became more powerful with huge income.

The death of the Malik Shah marked the decline of Great Seljuks and by 1192 the dynasty ended. The pressures from the Crusaders and new Turcoman clans caused the Great Seljuk Empire to collapse.

The remaining Seljuk clans established their new capital at Konya (Iconium) around 1150 and ruled what would be known as the Seljuk Sultanate of Rum. Rum means Roman in Turkish lenguage. So literally the name of the state means Seljuks of Rome.

The Byzantine Empire was defined as (Eastern) Roman Empire in the past, Byzantine term made up by the historians of the modern ages. Seljuks used this name as they considered theirselves the new rulers of the Roman territories. Centuries later, Mehmed II, the Ottoman Sultan who conquered the Constantinople, used the same title besides his other titles like Khan, Sultan, Shah: Roman Emperor.

The small Seljuk ruling class governed a population that was mostly Greek-speaking Anatolian Christians, as well as a significant Jewish minority. 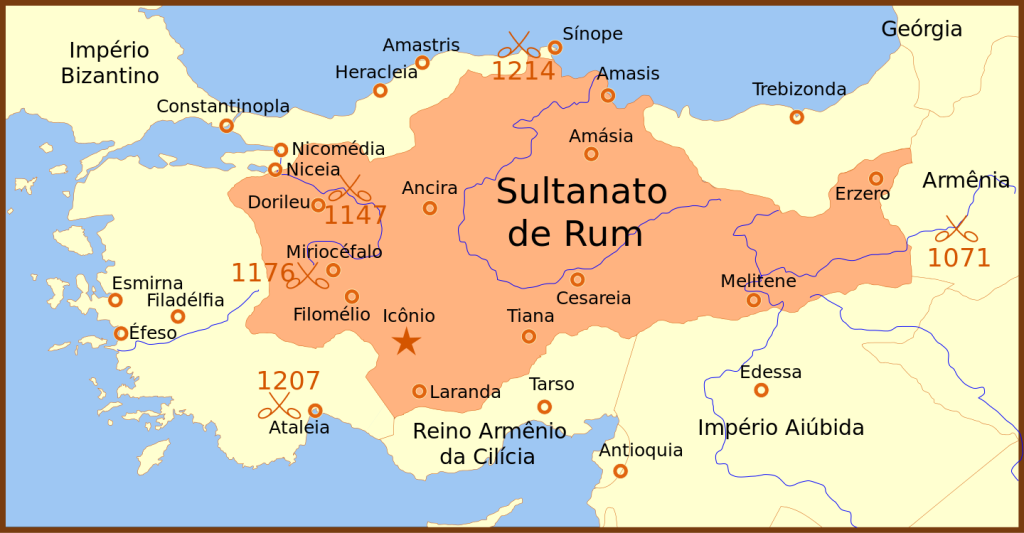 Greatest extent of Seljuk Sultanate of Rum Map For Anatolia

Seljuk rule was tolerant of race and religion. Churches and synagogues flourished, most of the finest examples of Seljuk architecture, such as the fine caravanserais and the mosques, medreses were built at Anatolia. Some of the best examples of these can be seen in Erzurum (Theodosiopolis), Sivas (Caesarea) and Konya (Iconium).

At the heart of the Empire, in Konya; sufi mystic, poet and theologian Jelaleddin Rumi lived. (1207-1273) He was the most famous and enduring figure of the Seljuk period.

Rumi’s preaching and spiritual leadership soon earned him a large following. His followers defined Rumi as their master. He organized his followers into the Sufi order of Mevlevi Dervishes. (Whirling Dervishes)

From Seljuk Sultanate of Rum to Ottoman Empire

Seljuks had occupied Byzantine lands two centuries ago and beaten them. A strange turn of fate brought them to the same outcome. Worn off as a result of the pressure by the tribes coming from the East, Seljuk Turks could not resist the mighty attacks of the Mongols and they were heavily beaten at the Battle of Kose Dag (1243)

Ottoman Empire as a Princedom

Red city-state is the Ottoman Turks. They grew into an Empire from a little vassal state. The green state on Europe is what is left from the Byzantine Empire in 14th Century. Map describes how Byzantine Empire shranked into a little state in centuries.

Rise of the Ottoman Empire

After the fall of Seljuks, many Turkish principalities (princedoms) appeared. Among those, there was one principality that came on top of others with its dynamism and belligerence. Based near Nicaea (iznik) on the Byzantine frontier. Ottoman Principality and its founder Osman Bey (Othman) paved the way for the foundations of one of the biggest empires in the history of the world.