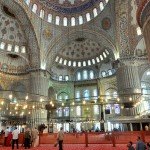 Blue Mosque is one of the most popular historical places in Istanbul. Located in the Sultanahmet district, the mosque dates back to the 17th century. Although the mosque is associated with blue due to its decoration, its original name is Sultan Ahmed Mosque. Blue Mosque has all the classical period decoration elements of the Ottoman Empire. Among them, there are blue colored … END_OF_DOCUMENT_TOKEN_TO_BE_REPLACED

The best mosques to visit in Istanbul are mostly located in the Historic Peninsula. In addition, there are beautiful mosques on the shores of the Bosphorus. Many of these mosques are located in districts such as Beyoglu, Besiktas and Uskudar (Asian Side). The vast majority of mosques in Istanbul are Ottoman-era structures built between the 15th and 19th centuries. These … END_OF_DOCUMENT_TOKEN_TO_BE_REPLACED 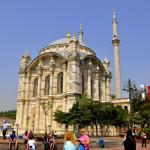 Ortakoy Mosque is the most beautiful mosque located on the European side of the Bosphorus. Located in Ortakoy, one of the most popular districts of Istanbul, the mosque is named after the district, even though its real name is Buyuk Mecidiye Mosque. It is possible to divide the Ottoman mosques in Istanbul into two categories as Classical and Modern. Classical period mosques … END_OF_DOCUMENT_TOKEN_TO_BE_REPLACED

Suleymaniye Mosque is located in the heart of the historical peninsula of istanbul. The mosque has a view of the Golden Horn and the Bosphorus from the most beautiful hill of the Old City. The Suleymaniye Mosque was built in the 16th century, when the Ottoman Empire was at the height of its power. Dedicated to Suleiman the Magnificent, the most famous sultan in Turkish … END_OF_DOCUMENT_TOKEN_TO_BE_REPLACED