Philip II, the king of the Macedonian Empire, was assassinated in 336 BC. His successor son, Alexander, was someone who would change the course of history. After crowned in Macedonia, located at the modern-day Greece, Alexander the Great kept the peace in his kingdom and started to campaign.

Entering into Anatolia with 32.000 infantry and 5100 cavalry, Alexander the Great eradicated the strong Persian Empire in Asia Minor. Greek City-States that had been occupied for many years by Persians gave Alexander the Great a hero welcome. Ephesus, one of the most famous ancient cities of our age, was among those liberated cities.

Determined to establish the biggest empire of the world, Alexander firstly marched on Persia, then Ancient Egypt and finally India. Capturing the large part of the known world at that time, Alexander syncretized the cultural heritage of the ancient civilizations with one another through his military campaigns. The legacy of Ancient Greece spread around the world because of Alexander the Great and a cultural bridge between the West and the East was formed.

After storming through for 14 years when he remained on the throne, Alexander the Great passed away because of an inflammatory disease at the age of 32. However, he achieved to fulfill his dreams in this short span of time. Following his death, his generals came to the throne and Macedonian Empire was divided into four. The generals named Cassander, Ptolemy, Lysimachus and Seleucus became the kings of Succession Period also known as Diadochi.

Seleucus, one of the generals of Alexander, embodies Seleucid Empire in modern-day Southeastern Anatolia, Syria, Iraq and Iran regions. Founded in 313 BC, The Seleucid Empire ruled in this area up to 190 BC. However, the Seleucid Empire was defeated by the Roman Empire at the Battle of Magnesia that broke out in 190 BC. After facing a heavy defeat, the empire began to collapse.

The Kingdom of Commagene and King Antiochus IV

The reason why we go back as late as to the period of Alexander the Great when we mention the Kingdom of Commagene is to emphasize the acculturation of that area. Apart from synthesizing the cultures of West and East, Alexander the Great also married to the daughter of the Persian King Darius III. The hero of our story King Antiochus I was inspired by those events, as well.

King Antiochus wanted to establish a bond between polytheistic Greek mythology and Zoroastrianism. For that purpose, he built a magnificent temple in 2100-meter-high Mount Nemrut. He put 8-meter-high statues around this structure that functions as both a temple and a mausoleum.

These statues are reflections of gods of Ancient Greek and Persian religions. If we interpret it with Greek Mythology to make it more familiar, the statues represent Zeus, Apollo and Hercules. On the other hand, these figures also symbolize equivalent gods in Persian religion, as well. In addition to them, there are two lion and two eagle statues, too.

The relief figures that represent Persian and Macedonian ancestry of Antiochus I are also quite impressive. The artistic exposition on the statues carries the influence of Greek, Persian and Armenian cultures.

The king of Commagene Antiochus I placed his own statue among these symbolic figures and emphasized his special relationship with all these divine characters. After declaring himself as a god-king, it is obvious that he wanted to be worshipped as a divine being after his death.

Facts about Mount Nemrut in Turkey 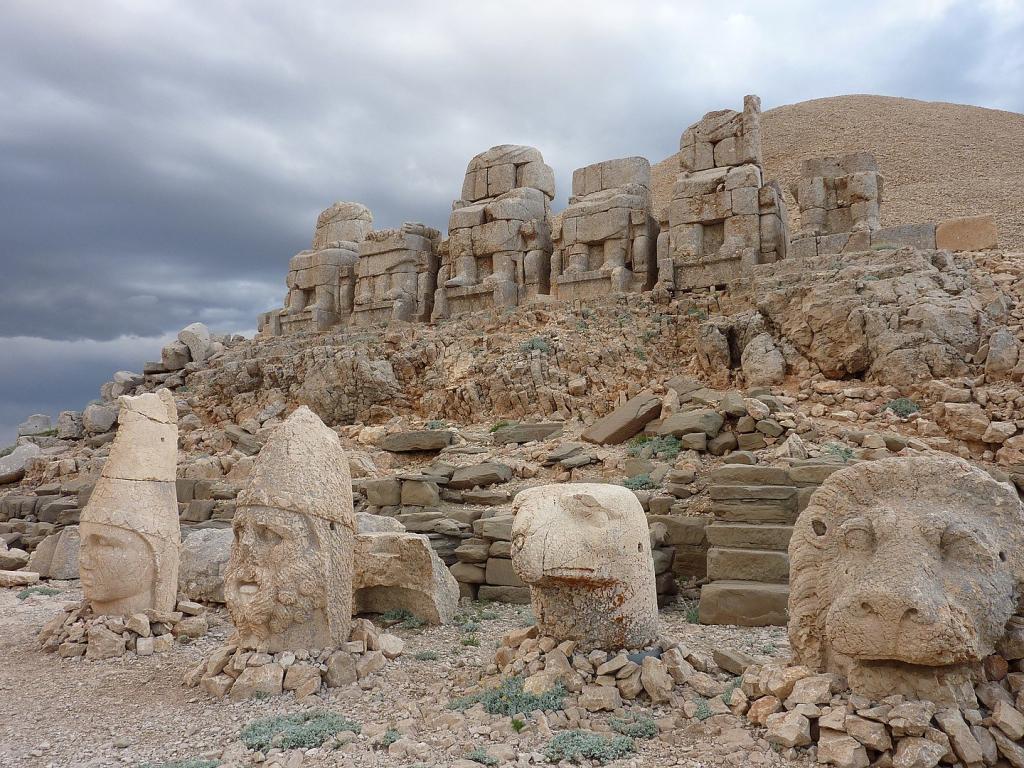 The Statue Heads at Mount Nemrut

Entrance fee to Mount Nemrut is 25 Turkish Liras. Ticket is free for children under the age of 8. Museum Pass Turkey is valid in Mount Nemrut, which is an archaeological site affiliated to the Turkish Ministry of Culture and Tourism.

There may be changes in the visiting hours of Mount Nemrut in Adiyaman due to various activities or restorations. Therefore, you are advised to visit the official website of the museum to see the latest status before you go.