Gobekli Tepe is located in Sanliurfa, formerly known as Edessa. Sanliurfa is in the southeast of Turkey, and it’s also known as the “City of Prophets” thanks to its thousands of years of history.

It’s possible to see the remnants of various beliefs in Anatolia. The Hittites, the Ancient Greece, and the Roman Empire era can be given as examples of polytheistic beliefs.  For instance, Yazilikaya at Hattusa, the capital of the Hittites, and the Temple of Artemis at Ephesus are two important monuments in the history of polytheistic religions.

Following the era of polytheistic religions, places such as Ephesus, Antioch, and Cappadocia played an important role in the history of Christianity, which is a monotheistic religion. For example, St. Peter, one of the most prominent followers of Jesus Christ, built the first church in the Christianity, the Church of Saint Peter in Antioch.

The Christians who escaped from the oppression of the Roman Empire’s soldiers, took refuge in the underground cities of Cappadocia and practiced their religions secretly. After Jesus’ death, St. John and the Virgin Mary travelled to Ephesus and lived there.

The First Temple of the World, Gobekli Tepe

Anatolia witnessed an important discovery, so much so that, it changed the history of civilization pretty quickly. A temple located in 16 km northeast of Sanliurfa was found in Gobekli Tepe and this temple is an older monument than some others such as even Stonehenge in England or the Pyramids in Egypt.

Therefore, Gobekli Tepe is such an important spot that can change our knowledge regarding the prehistoric ages, which earned its place in UNESCO’s World Culture Heritage List.

The history of Gobekli Tepe dates back to 10,000 BCE and it was discovered by a German archeologist named Klaus Schmidt during the excavations made in 1995.

Firstly, it was believed that there was an ancient site during the first excavations made here. However, as the excavations continued, it was realized that Gobekli Tepe was a temple.

There are three meter high monolith columns at Gobekli Tepe, on which there are reliefs of an antelope, a snake, a fox, and a lion. Additionally, some abstract drawings and characters can also be seen on these columns. It’s believed that various religious rituals were carried out here and gods were offered sacrifices.

The common belief regarding the prehistoric ages was that people didn’t build temples during the hunter gatherer era. The monuments that were acknowledged as religious sites were built after humans became sedentary and built cities. While cities were built, it was the houses that were built first, then it was living spaces and temples followed the others. Moreover, all of these developments were believed to have happened in the advanced ages of the Neolithic Age.

However, Gobekli Tepe demolished the common beliefs regarding the history of humanity in the prehistoric ages. People who built Gobekli Tepe designed it to serve as a religious site, maybe even a holy site. This is because no trace of settlement was encountered during the excavations made at Gobekli Tepe. Thus, it means that people who built this temple visited this site only to perform rituals and from long distances.

Gobeklitepe is located in Sanliurfa, Turkey 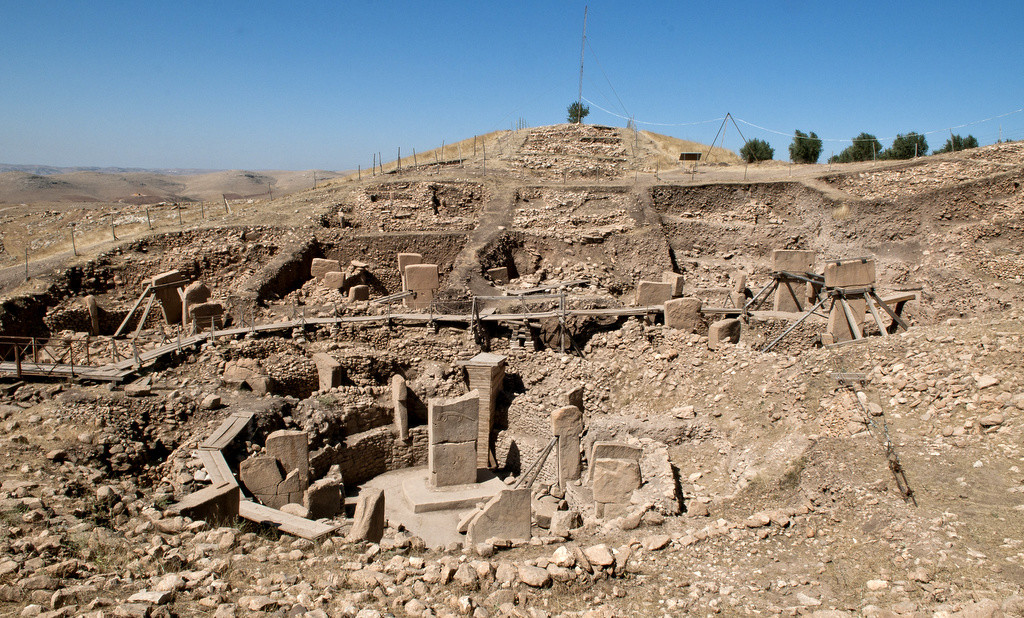 What is Neolithic Revolution?

10,000 BCE is regarded as the early stages of Neolithic Age. Humans lived as hunter gatherer during these years and they didn’t begin farming yet as farming is associated with the collective and settled life.

Following the first stages of the settled life, permanent settlement areas were built and the first examples of city planning came out. Houses, streets, squares, and religious sites were built during this era.

The discovery of Gobekli Tepe has the potential to change this classical view that was regarded as true for a long time as it proves that people began worshipping a creator and carrying out religious rituals such as making sacrifices long times before the Neolithic Revolution.

Thus, it’s a proof that people began building temples before they settled down and farming. Furthermore, Gobekli Tepe is a sign that people built the temples first and the cities were shaped around these religious monuments.

Rising Popularity of the Archaeological Site

As Gobekli Tepe was a discovery that has a magnitude to change the perception of history today, it aroused curiosity among people, which had a chain reaction that resulted in the pop culture. Netflix took the initiative to shoot a series named The Gift about Gobekli Tepe.

Gobekli Tepe, thanks to its mystery, is a major candidate to be the subject of many novels, TV series, and movies. As the excavations are still in process, Gobekli Tepe has been turned into a museum. As the walking routes were built, the visitors can visit this historical site without disturbing the archeologists working here.

The entrance fee for Gobekli Tepe Archaeological Site is 45 Turkish Liras as of 2020. Tickets are free for children under the age of 8. Museum Pass Turkey is valid at the entrance to Gobekli Tepe, which is affiliated to the Ministry of Culture and Tourism.

Gobekli Tepe Ruins are open to visitors between 08:00 in the morning and 19:00 in the evening between April 1 and October 31, the summer season. It is closed at 17:00 between 1 November and 1 April, which is considered as the winter season. Gobeklitepe can be visited every day of the week.

There may be changes in the visiting hours of Gobekli Tepe due to various activities or restorations. Therefore, you are advised to visit the official website of the museum to see the latest status before you go.