There are many things to do in Cappadocia, one of the most unique places in the world. Among them, it is quite interesting to fly with a hot air balloon, trekking in the valleys and visit the churches carved into the rocks. However, if there is anything more interesting in Cappadocia than these activities, it is to visit ancient underground cities.

The living spaces created by people under their houses to protect them from wars and looting have evolved into cities over the centuries. Those living in the rooms connected to each other through tunnels needed common things. Therefore, wine cellars, churches and meeting rooms were built in underground cities. Even the ventilation system has been added to ensure long-term accommodation.

In this article, I will introduce you to Kaymakli, one of the two most visited underground cities in Cappadocia. In the previous article, we gave information about Derinkuyu Underground City. You can also read it after this article.

Jesus’ death dates back to the time of Augustus, the first emperor of Rome. After this date, Christianity was spread by the disciples of Jesus to the most important cities of the world. Some of these cities are Alexandria, Antioch, Ephesus and Rome. However, this rapid spread of a new faith did not please the Roman emperors. Because the rise of Christianity meant the disruption of the established order.

For centuries, the Roman authorities pursued a policy of oppression against Christianity. There was no peace for Christians in the Roman Empire, which ruled most of the known world. Christians living in Antakya and Kayseri, the ancient cities of the past, fled to Cappadocia. They expanded the underground cities and began to live here.

We see the traces of this period in two of the most important underground cities of Cappadocia such as Kaymakli and Derinkuyu. The hiding of Christians from the persecution of the Roman governors lasted for centuries and finally ended in 313. Emperor Constantine, who reigned in the 300s, brought freedom of belief to Christians with the Edict of Milan.

However, the Cappadocian Christians continued to live here. Cappadocia became one of the religious centers of Eastern Christianity in late Roman and Byzantine periods. The rock churches and monasteries that we see today at the Goreme Open Air Museum are also from that period.

The Byzantines, who escaped from the raids organized by the Arabs in Anatolia, withdrew to the underground cities and lived there. During the Seljuk and Ottoman empires in Anatolia, it was a shelter during the wars. Historical records show that the tunnels were used by the Greek citizens of the Ottoman Empire until the end of the First World War.

What to See in Kaymakli

In the underground city of Kaymakli there are winery, baptistery and missionary school. When you go downstairs, you can see the food stores. The holes in the tunnels for air circulation are still visible.

In addition, buildings such as meeting rooms, cemeteries, churches and wells prove that there is a complex city life here.

Note: Some historians claim that Kaymakli‘s history dates back to the Hittite Civilization. However, most of the finds we can see today are dated to the late Roman and early Byzantine periods. 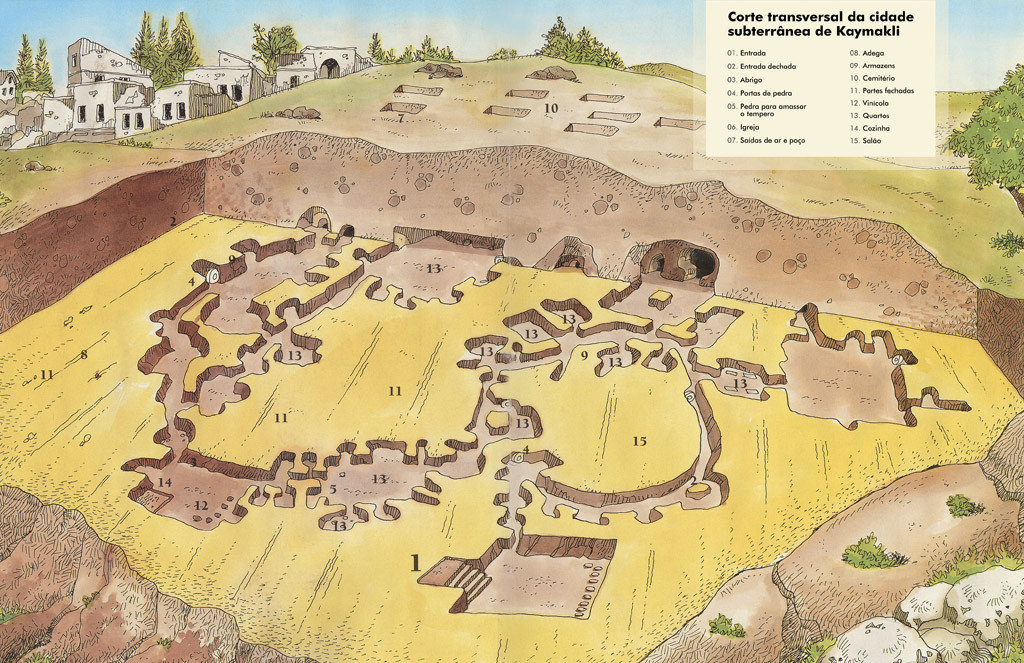 The above map shows the living areas, rooms and tunnels. The underground cities of Cappadocia are designed for temporary accommodation. However, sometimes because of the wars that lasted for months, they had to live here for a long time. This caused the underground cities to expand deeper.

Admission fee is 42 Turkish Lira per person as of 2020. Tickets are free for children under 8 years old. The Museum Pass Cappadocia is valid at Kaymakli Underground City.

Although Kaymakli is open every day of the year, there may be changes in working hours due to events and renovations. So before you go, you can visit the official website of the underground city to see the latest status.