Goreme is one of Turkey‘s major attractions, has a long history. The Goreme Open Air Museum, which was included in the UNESCO World Heritage List in 1985, draws attention with its unique monuments in the world.

The settlements in Goreme consist of churches, chapels, monasteries and social spaces carved into the rocks in a valley. The most unique examples of Christian art can be seen in the works here. According to art historians, the geometric ornaments used in churches in Europe first appeared in churches and chapels in the Goreme.

It is claimed that the life around Goreme dates back to the Hittite Civilization. However, most of the buildings that we can see today are from Roman and Byzantine periods.

Although some archaeological finds in the region show that life dates back to ancient times, the prohibition of Christianity in Roman Empire era made this region more attractive. The Christians fleeing the persecution of the Romans began to settle in rock caverns and tunnels. The first religious structures in the region emerged in this way.

Goreme maintained its religious function throughout the Middle Ages as well. Indeed, we know that most of the religious structures in the region were built between the 11th and 13th centuries. This is because the monk’s life became popular during the Byzantine Empire. Many people who wanted to live ascetic life by devoting themselves to Christianity have migrated here and joined the monasteries.

Many famous saints who lived in the early period of Christianity were born and raised in Anatolian lands. Therefore, some cities located in Turkey on the Christian pilgrimage route. The most important of these are Ephesus, Demre, Cappadocia and Antakya.

For example, St. Nicholas, commonly known as Santa Claus in the world, lived in Demre (Antalya). St. George, one of the most important saints of Christianity, was born in Cappadocia. The church founded by St. Peter, one of Jesus’ disciples, can still be seen in Antioch (Hatay).

In addition to these, there was St. Simeon, whose name is identified with both Antioch and Cappadocia. Saint Simeon was a monk who spent his life on a column in Syria (near Aleppo). Simeon, who devoted his existence to Jesus, introduced a new definition of the concept of monkhood. There are churches in both Cappadocia and Antakya dedicated to the saint known as Simeon Stylites.

However, the most important church leader who marked the history of Cappadocia was a famous cleric named St. Basil the Great. St. Basil, who lived in the same period as the other saints listed above, was born in 330 in Caesarea (Kayseri). Basil, who gave a new shape to the early monastery life, gathered the churches in Goreme under a new discipline. These rules, which reorganize the monastery life in early Christianity, are called The Rule of Saint Basil.

The Monastery of Girls and Boys, built in the 11th century, is one of the most important buildings of Cappadocia. This monastery, which consists of seven floors, was built in a structure that is rarely seen in other churches in Goreme. According to historical sources, male and female students who were educated here visited the surrounding villages after graduation and invited people to Christianity.

Elmali Church, located on the right side of the Monastery of Girls and Boys, was built in the early 12th century. Religious stories such as the resurrection of Lazarus, Jesus’ last supper, Jesus’ entry to Jerusalem, and Jesus’ descent to hell were depicted on the ceiling of the church. The Elmali Church is a cross-planned building with 9 domes supported by four columns.

Built in the 11th century, the Yilanli Church takes its name from the painting of St. George. This is known as the Serpent Church because the green dragon that St. George fought was thought to be a snake. There are frescos on the walls and ceiling of the church, depicting scenes from the Bible.

Tokali Church is the largest cave church in Goreme. It consists of four separate sections. Among these sections the most impressive frescoes can be seen in the Old Church and the New Church. The frescoes depicting the most important events in the Bible are still alive. The most distinctive feature that distinguishes the frescoes in Tokalı Church is the use of a very vivid shade of blue.

I’ve listed some of the churches in Goreme on the top lines. However, one should be mentioned in particular. The Dark Church, which has the best preserved Christian frescoes in Cappadocia, will be the most important part of your visit to the Goreme Open Air Museum.

You can find out more about the church in Dark Church of Goreme blog post. A separate ticket is required for entrance to the Dark Church. The ticket or museum pass used to enter Goreme is not valid. 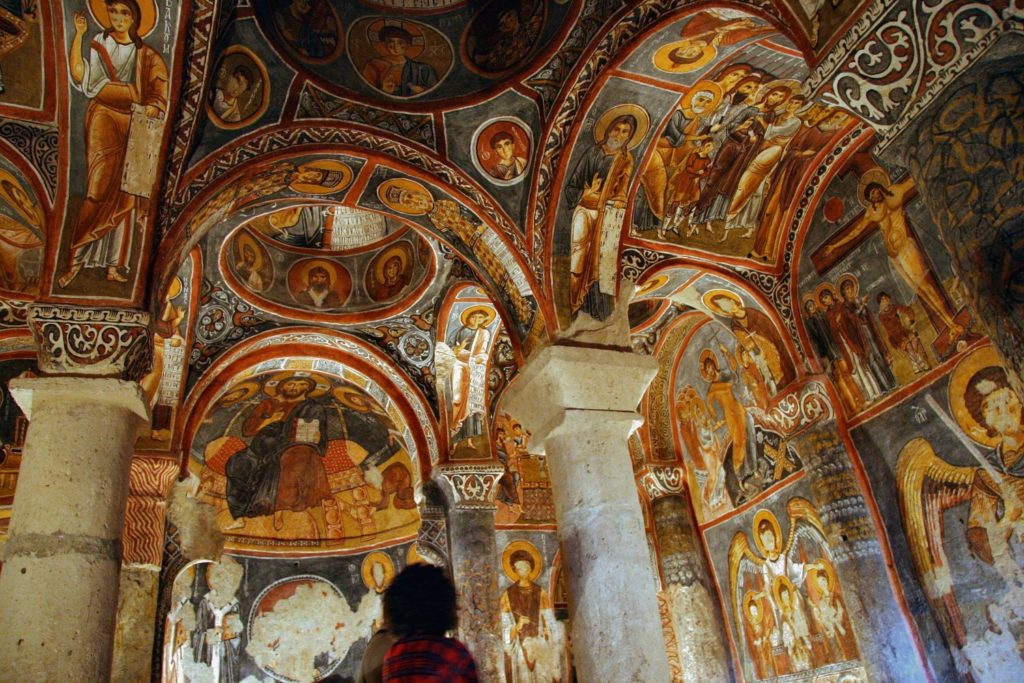 The entrance fee to Goreme Open Air Museum is 54 Turkish Liras. Admission ticket is free for children under 8 years. The ticket price you pay for Goreme does not include the Dark Church. Museum Pass Turkey is valid in Goreme Cave Churches.

During your visit to Cappadocia, you can skip the line in front of the Goreme Museum by taking a guided group tour. You can buy the fast track tickets of Goreme Open Air Museum sold by GetYourGuide from this link. You can cancel with a full refund of up to 24 hours.

Goreme Open Air Museum is open to visitors between 08:00 and 19:00 in the summer season. The summer season starts on 1 April and continues until 1 October. In the winter season it closes two hours earlier and no visitors are allowed after 17:00.

Visiting hours at the museums in Turkey might change each season. For this reason, you can visit the official website of the Goreme Museum and check the latest status.