The collapse of the dome of Hagia Sophia in 558

The dome of Hagia Sophia was the greatest architectural achivement of human race in the medieval world. The height and breadth of the dome that dominates the church’s central space have awakened awe and admiration in visitors in all periods. The Christian world associated the construction of this bold dome with superhuman powers, and this belief , coupled with religious faith, made the Hagia Sophia the unrivalled symbol of medieval mysticism.

Born Out Of Nika Revolt

Everything started at the Hippodrome of Constantinople during the chariot races. The rivalry between the Greens and Blues was out of control. The fanatics of these teams were fighting all around the streets of the imperial city.

The tension between two groups was at its height, when the chariot races were held in the Hippodrome on 13th of January 532. The angry populace insulted the Emperor Justinian in order to protest the arests from both sides. Justinian fled to the adjacent royal palace and a deadly riot broke out. The crowds set Hagia Sophia on fire alongside with many other important buildings. The General Belisarius put an end to this madness by a massacre in the upshot. 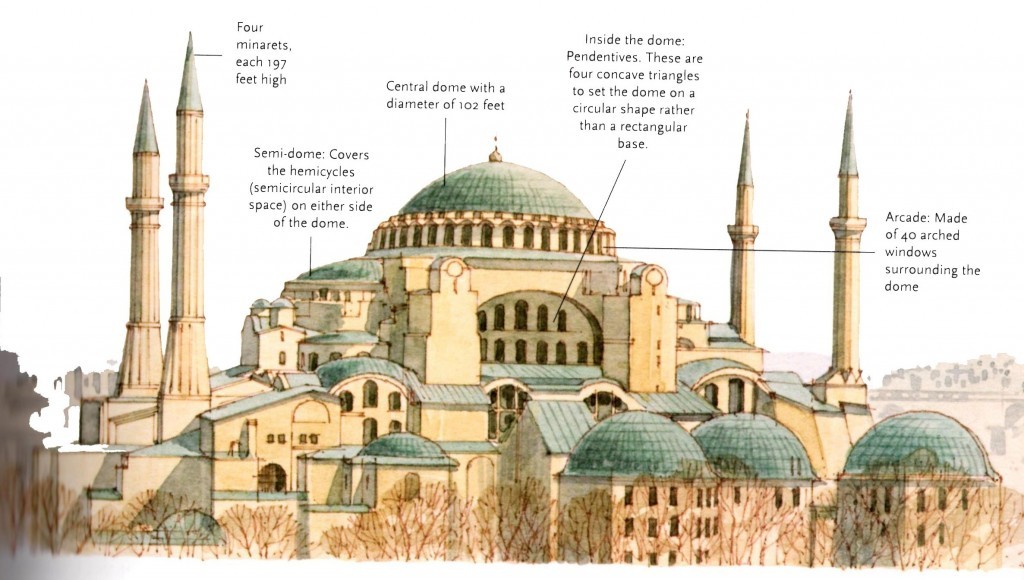 Justinian wanted to legitimate his kingship with a great masterwork. The construction of Hagia Sophia started in 532 and finished in 537. This gigantic structure was completed in a record construction time. The architects, Anthemios and Isidoros the Elder, achieved this great success by erecting the legendary building in 5 years only.

They had to use recycled materials of antique cities to speed up the production. Such as the columns of Temple of Artemis. This enormous speed of the production caused some mathematical mistakes as well. It would be unveiled only 20 years after the ceremonial inauguration.

The Collapse Of The Hagia Sophia Dome

The capital of Byzantine Empire, Constantinople, was the earthquake zone. Following the devastating earthquake of 557, dome of Hagia Sophia was destroyed. Emperor Justinian was still alive when the earthquake striked his masterpiece, whereas both architects were dead. Nephew of the architect Isidoros the Elder, “Young Isidoros” was entrusted with the work by the Emperor Justinian.

Young Isidoros took the work slowly and built a granitic dome in four years. The original height of 49 meters were increased to 56 meters. The reason was that Young Isidoros realized a calculation error in the original dome so he used a lightweight raw material and more efficient technique. As a result, the dome he built still stands after 1500 years.

Reportedly the young architect used volcanic raw material to produce solid bricks. This new bricks were lighter, yet much stronger. Young Isidoros also added 40 windows around the new dome. Therefore he obtained perfectly balanced, less heavier, and solid dome after all. The proof of his accomplishment is the Hagia Sophia of today itself. The dome still stands after 1500 years.