The Ancient city of Ephesus was under the influence Cybele, the goddess of fertility. Cybele evolved into the Greek goddess Artemis due to the impact of Ionian city-states, so much so that, the greatest temple dedicated to Artemis was erected in Ephesus. What makes the ancient city of Ephesus so famous is the existence of Temple of Artemis in history.

Unfortunately, there is not much left of the temple these days. However, the solemnity of the Temple of Artemis and the loyalty of the people of Ephesus to this temple became a legend.

There are long lines to enter the Ephesus Ancient City. You may browse Skip The Line Ephesus Tour from here which is really reasonable! Easy cancellation with a FULL REFUND up to 24 hours in advance.

Foundation of Ephesus and King Androcles

Ephesus and Istanbul show similarity in the way they were founded according to the legends. The story of both cities began with the mysterious prophecies of an oracle in Delphi, Greece.

According to the legend, Androcles, the son of the King Codrus, decided to leave Athens upon his father’s death. In ancient Greece, an advice of the oracle of Temple of Apollo would be sought before making such important decisions. So, Androcles told the oracle that he wanted to make a new start, but didn’t know where to go.

Androcles crossed the Aegean Sea and his ship anchored at the bay where Kucuk Menderes River meets the sea. The scouts exploring the area got hungry. They did fishing and started cooking the fish they caught. At that moment, one of the fish jumped to the floor. Then the pig waiting among the bushes till that moment whisked the fish away and ran.

Androcles got on his horse and went after the pig. The pig ran up to a hill and Androcles hit the pig with his arrow. So, the prophecy of the oracle came true. The fish gave the signal and the pig guided them. The city where Androcles founded his new city was where he killed the pig.

The Union of Ionia

The new city of Ephesus was founded on a commanding hill to protect it from the attacks via the sea and the land. Therefore, the city developed quickly and grew rich as it was not vulnerable to invasion. Gradually, Ephesus became an important part of Ionian League that was composed of 12 city-states. Ephesus showed tremendous improvement in philosophy and became the center of the intellectual world.

The Cult of Artemis

In Ephesus, a temple was erected to honor Artemis, the Greek goddess of the Moon and the Hunting. After 800 B.C., Ephesus became a religious center and an important location on the pilgrimage route.

The King of Lydia, Croesus

In 800 B.C., the King of Lydia, Croesus set his eyes on the prosperous and rich Ephesus. He wanted to conquer the city and took advantage of its resources.

However, Ephesians had such deep trust in the Goddess Artemis that they didn’t even build walls to protect the city. They thought Artemis would protect the city from the temple that was 1,200 meters far from the city center.

Due to the almost non-existing defense of the city, the King of Lydia seized the city easily. Some of the Ephesians were exiled from the city and they were forced to live somewhere nearby the temple. The Lydian rule began in the city.

King Croesus showed the respect that the Temple of Artemis deserved, so much so that, he allocated a budget to make this temple more beautiful from his legendary wealth.

Legendary Temple of Artemis in Ephesus

The Persians began to invade Anatolian Peninsula from the East in 550 B.C. They seized all the Ionian cities on the Aegean coast and they vandalized these cities. However, thanks to the diplomatic success of the Ephesians, the city of Ephesus was saved from being ruined.

The fact that Ephesus was a rich portal city was another factor that helped it escape from destruction. Ephesians persuaded the Persian King not to invade the city by promising to pay high taxes in return.

The Destruction of the Temple of Artemis

An Ephesian lunatic named Herostratus set the Temple of Artemis to the fire to put his stamp on history and it caused an irreparable damage to the temple. The temple had to be rebuilt and the Ephesians used their every means to do so.

The same year that the new temple was supposed to be built, Alexander the Great arrived at Anatolia with his army that’s greatness was unprecedented to that date. He was chasing the King of the Persians and it was the beginning of his military campaign that would last till India.

Alexander fell in love with Ephesus immediately and he was amazed by the beauty of the temple. He ordered the restoration of the temple and he said he would cover the expenses himself on condition that the temple was dedicated to him.

However, the Ephesians rejected this offer with a smart move. They made sure it continued to be known as the Temple of Artemis by claiming that a temple that was dedicated to another god or goddess before couldn’t be dedicated to another one as it would overshadow the name of the former one.

The restored Temple of Artemis put its mark on the world thanks to its beauty during the Hellenistic era, so much so that it even entered the list of Seven Wonders of the World. 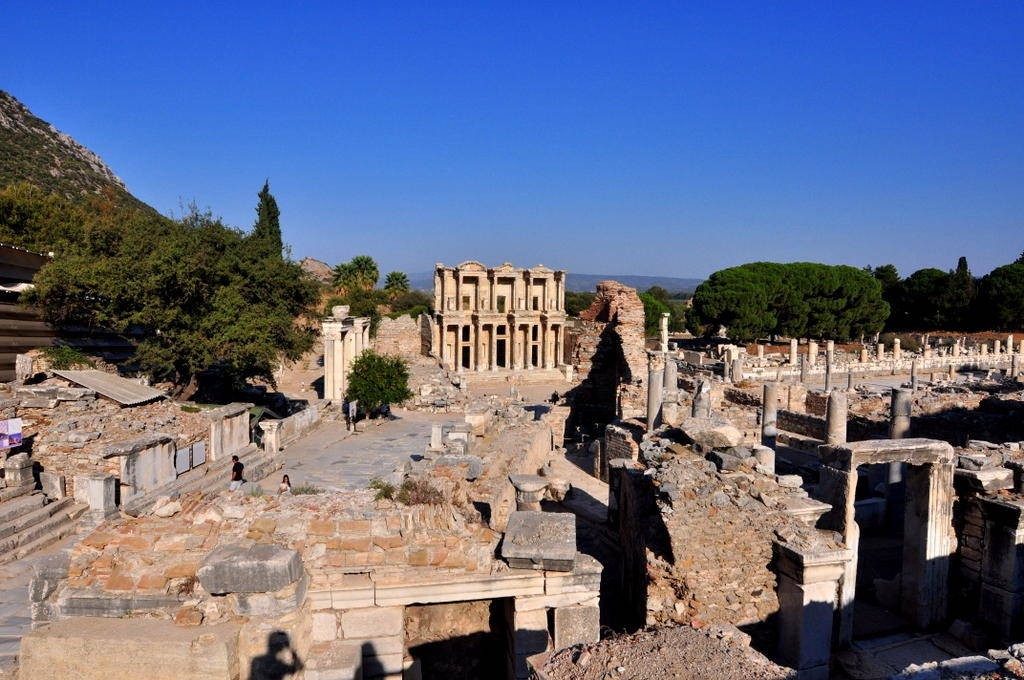 Diadochi Period after Alexander the Great

Alexander the Great founded a magnificent world empire. However he died at a young age unexpectedly. The Kingdom of Macedon that Alexander the Great shaped was shared among his generals after his death. The region where Ephesus was located fell under the rule of the general named Lysimachus.

Lysimachus was a quite skilled ruler. He realized that the port was filled with alluvium and decided to move the city to another location. Otherwise, Ephesus would be in danger of losing its feature as a trade port city. However, the Ephesians were obstinate and insisted on staying where they were. Therefore, Lysimachus blocked the sewers of the city to force them to move. Ephesians had to cope with illnesses, dirt and heavy smell due to the blocked sewers and they decided to move although involuntarily.

Lysimachus also built the city walls that Ephesus never had and the city turned into a well-protected one.

Ephesus during the Roman Empire

The city of Ephesus fell under the rule of Roman Empire like the rest of Anatolia. During the rule of Nerva-Antonine Dynasty in the 1st and 2nd century A.D., the prosperity of the city hit the top. Ephesus was rebuilt by the Romans in a modern style and that turned Ephesus into a breathtakingly beautiful city.

The famous Library of Celsus was also built during the Roman Era. Ephesus became more important in time, so much so that it became the capital of the Asian states of the Roman Empire.

The Library of Celsus in Ephesus Ancient City 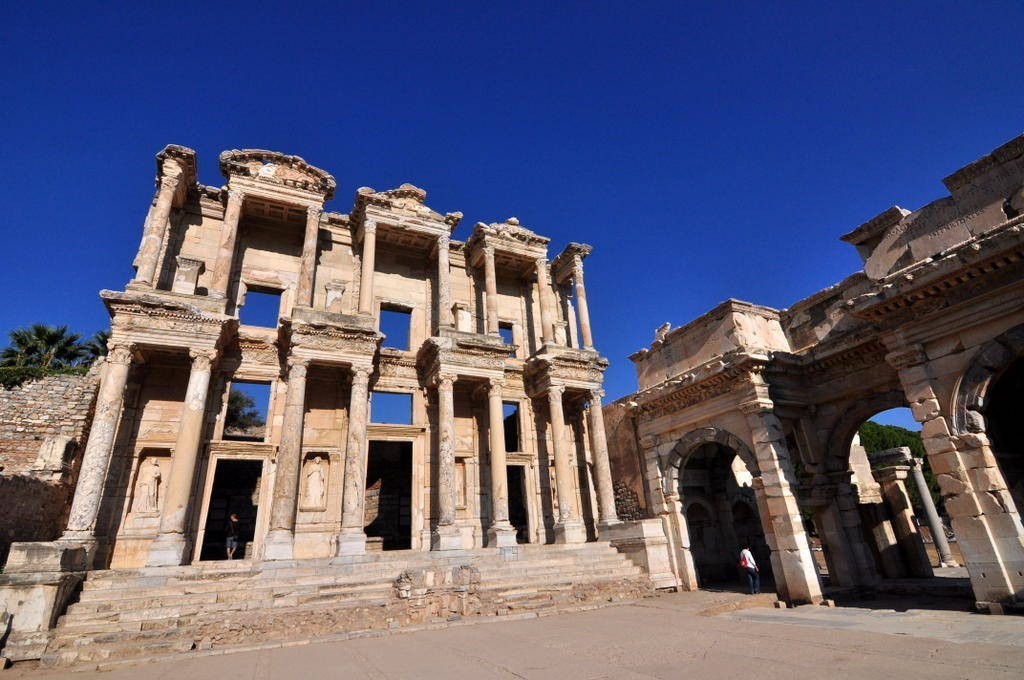 Library of Celsus in Ephesus

The Impact of Christianity in Ephesus

Following Jesus Christ‘s death, his disciples traveled all around the Anatolia and the rest of the world to spread Christianity. And it’s believed that Saint John and Jesus Christ’s mother, Virgin Mary, came to Ephesus and lived there. Therefore, Ephesus became an important city for Christians on the pilgrimage route.

The Fall of Ephesus

Although its port was cleared thanks to the great efforts of the Roman Emperor Hadrian, getting far from the sea and the port reduced the importance of Ephesus gradually.

Ephesus continued to be a settlement area until 16th century during the Byzantine and Ottoman Empire eras. However, it continued losing its glamour and importance over the years.

The entrance fee to the ancient city of Ephesus is 72 Turkish Liras as of 2020. Admission ticket is free for children under 8 years old. Museum Pass Turkey is valid for entrance to Ephesus Ruins.

There are long lines to enter the Ephesus Museum. You may browse Skip The Line Ephesus Tour from here which is really reasonable! Easy cancellation with a FULL REFUND up to 24 hours in advance.

Visiting times of the Ephesus may change due to some events and renovations. So before you go, you can visit the official website of Ephesus Archaeological Site to see the latest situation.