History Of Turkey And Russia Relations

History Of Turkey And Russia – Ottoman Empire vs Tsardom of Russia

History of relations between Turkey and Russia has generally not been a friendly one. There is a priceless medal set bestowed by the Russian Tsars to Ottoman Sultans in the Imperial Treasury in Topkapı Palace.

The Ottoman State was founded on 1299 upon the collapse of the Turkish state that had existed before in the region. After the collapse of Seljuk Empire, Ottoman State started to exist as a small city state before evolving eventually into an empire by expanding into Anatolia and Balkans and capturing Constantinople in 1453 by officially ending the rule of Byzantine Empire.

After the end of 17th century when Ottoman and Russian wars started, Ottoman Empire went into a decline and collapse period, which took two hundred years.

Russian founded the Grand Duchy of Moscow in 1283. After being suppressed for a long time by Mongolians, Russian chose Orthodox sect in the 10th century with the influence of Byzantine.

After the fall of Constantinople in 1453, Russian declared themselves as the successor of Byzantine Empire. That is why Grand Duke Ivan III married the last Byzantine Princess Sophia Palaiologina. In 1547, Russia switched from dukedom to Tsardom.

The first Tsar Ivan IV, commonly known as Ivan the Terrible, was the grandson of Sophia. Tsardom of Russia strengthened its claim as the patron and successor of Byzantine. Using double headed eagle as a symbol, the rise of Tsardom of Russia peaked during the reign of Peter the Great.

Russia becomes a European power By Petro The Great

Gaining Tsar title in 1682, Petro played a great role in Russia’s ascending to an important place in European History. In an attempt to take Russia to the level of European countries of the Enlightenment period, Petro made reforms in social, cultural, military and scientific areas.

He realized that Russia was stuck between Arctic Ocean and Black Sea, controlled by the Ottomans, and therefore he started the initiatives to expand into the south. This strategy paved the way for a fierce struggle between Russia and the Ottomans, which took hundreds of years.

Ottomans were successful in the initial wars. After the second half of the 18th century, Russian started to dominate and Ottomans started to lose frequent wars. 19th century was another one during which the wars continued to happen. In this century, the period of collapse began for the Ottomans.

In the Dardanelles Campaign (Gallipoli), English and French navy and then an army tried to capture Dardanelles in order to reach Bosphorus. Ottomans managed to get a victory here even though it was on the verge of collapse.

This war witnessed the rise of genius lieutenant colonel called Mustafa Kemal Atatürk to the rank of the commander of the army. When the essential help could not be given to Russia, Tsar became powerless and a revolution rose in Russia. Russia withdrew from the war in 1917.

Ottoman Empire was occupied in 1918 and its army was scattered. Mustafa Kemal resigned from his duty as a general and organized the War of Independence. In this period, Turks received aid from the Russia.

Born out of the ashes of the fallen empire, Independence Army won the independence in the leadership of Mustafa Kemal Atatürk and paved the way for the foundation of the Republic of Turkey. 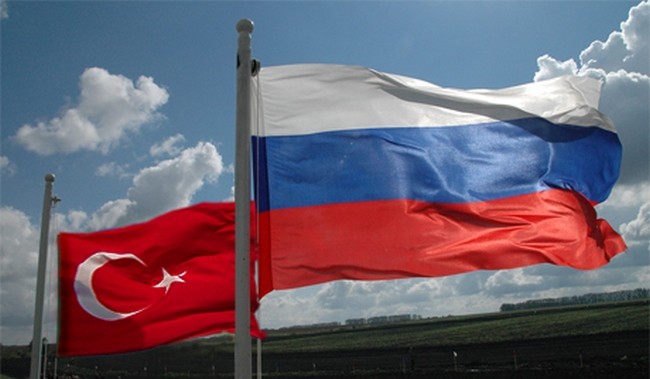 Turkey managed to stay out of World War II. However Joseph Stalin who strengthened his grip on power wanted to finish the job which had been unfinished since Petro’s time. He openly demanded the straits from Turkey in order to exert its dominance in the Black Sea. Young Turkey did not have enough power to deal with Russia and therefore it applied NATO and was accepted.

During the Cold War, Turkey followed a policy in line with the USA. Russia was once again on the other side of the axis.

Although a perfect friendship was never established between Russia and Turkey, trade relations are quite intense. Turkey buys natural gas from Russia which buys agricultural and textile products from Turkey.

As a matter of fact, before the civil war in Syria came to exist, relations between Turkey and Russia were quite mild and steady. Both countries lifted visa requirements due to strong trade relations. Going to Russia for Turkish citizens had never been so easy before.

Downing of the Russian warplane

After the events in Syria and Russia’s sending its troops there, Russia, which was a northern neighbor of Turkey actually became a southern neighbor as well.

During Russia’s military operation in Syria, one of the jets which was passing through Turkey border was shot down by a Turkish F-16 due to the accusation of border violation and that is why tensions between the two nations rose to the breaking point.

Future of Turkey and Russia relations

A war between two countries does not seem likely, of course. Yet the relations took a critical hit. Russians are among the top three nations visiting Turkey for touristic purposes.

It is evident that Aegean and Mediterranean hotels will suffer financially from this tension. There are also tens of thousands of Turks living in Russia due to a marriage just like the Russians living in Turkey for the same reasons.

Russia and Turkey relations over 500 years have seen very difficult times. Things will go back to normal even though it may take some time.

Sultan Suleiman The Magnificent And Roxelana