Where is Blue Mosque in Istanbul?

Where is Blue Mosque in Istanbul? How to Get There?

Blue Mosque is located in the heart of Istanbul’s Old Town. However you need to be careful when you describe the Blue Mosque to a taxi driver because it’s not the real name of it. Let’s see how!

The Real Name of the Blue Mosque

Blue Mosque is known as Sultanahmet Mosque by the locals. “Blue” is a given name by the foreign visitors due to the colour of interior decoration.

Ottoman Mosques usually named after the person who built it. As the “Blue Mosque” was built by Sultan Ahmed in 17th Century, it’s called as Sultan Ahmed Mosque. However, “Ahmed” is pronounced as Ahmet in the modern Turkish lenguage. In order to simplify the name of the mosque, it’s renamed as Sultanahmet Mosque.

Sultanahmet is also the name of the neighborhood. Altough Historical Peninsula (Old City or Constantinople) is officially known as Fatih, people have a tendency to call it as Sultanahmet.

What to Tell the Taxi Driver about Blue Mosque’s Location?

If you would be going to Blue Mosque by taxi, you need to tell the taxi driver  that you’re going to “Sultanahmet Camii” -The exact name of the Blue Mosque in Turkish-. If you told him you were going to Sultanahmet, he would probably take you to the neighborhood but not to the mosque.

How to Get to Blue Mosque by Public Transport?

If you would be coming to Sultanahmet area from Beyoglu (Taksim, Istiklal, Cihangir, Tophane, Karakoy), the easiest way to get there is funicular and tram connection.

Istanbul’s traffic is usually unpredictible. If you get the Funicular F1 from Taksim Square in the direction of the KABATAS, you can connect to Tram T1 which operates between the KABATAS and BAGCILAR.

As Kabatas is the first stop for the tram, it will take you in the direction of Sultanahmet anyway. These are the tram stations to get from Taksim Square to Blue Mosque:

Then change to Tram T1 at KABATAS then wait until you arrive to Sultanahmet (Blue Mosque) tram station. 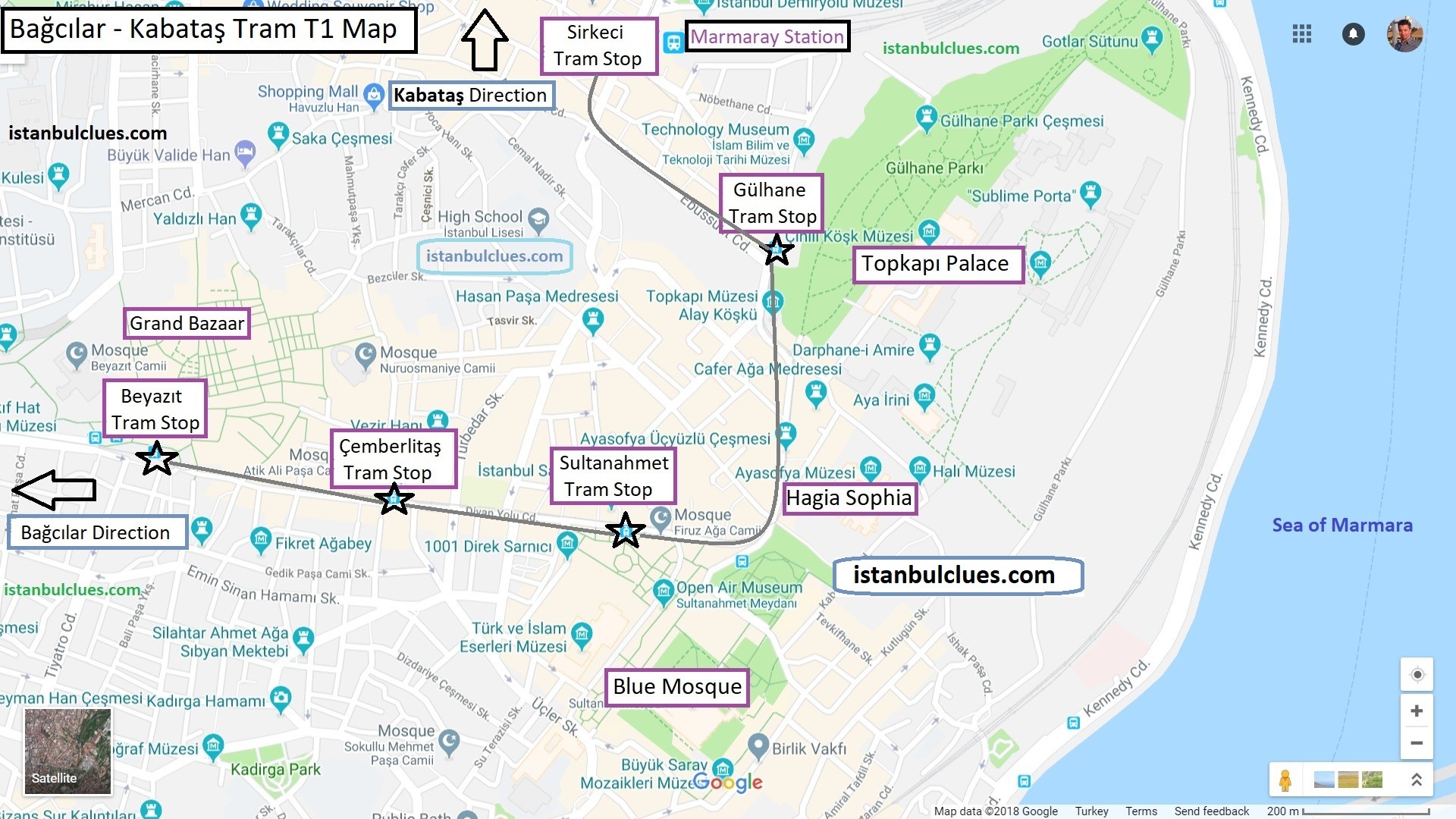 How to Visit the Blue Mosque?

Blue Mosque is located right next to Hippodrome of Constantinople. This big square was known as At Meydani during the Ottoman era. The easiest way to find the touristic entrance of the Blue Mosque is to approach the building from the Hippodrome side.

If you enter the mosque from Gate C you will see the monumental entrance of the courtyard of the mosque.

This Gate opens to The Inner Courtyard of The Mosque 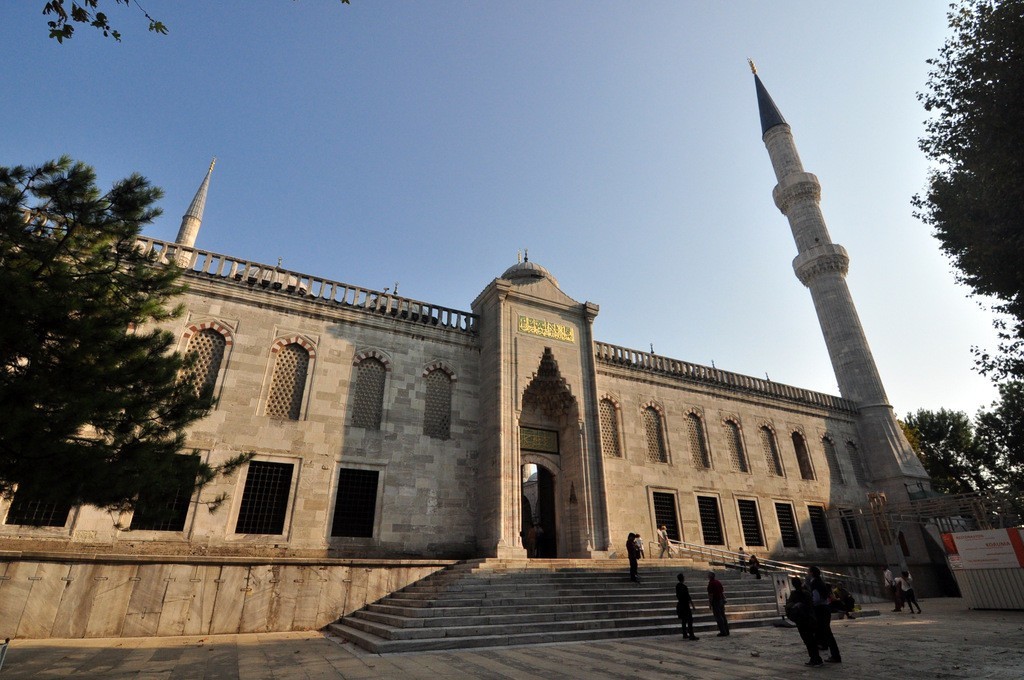 It Opens to This Courtyard 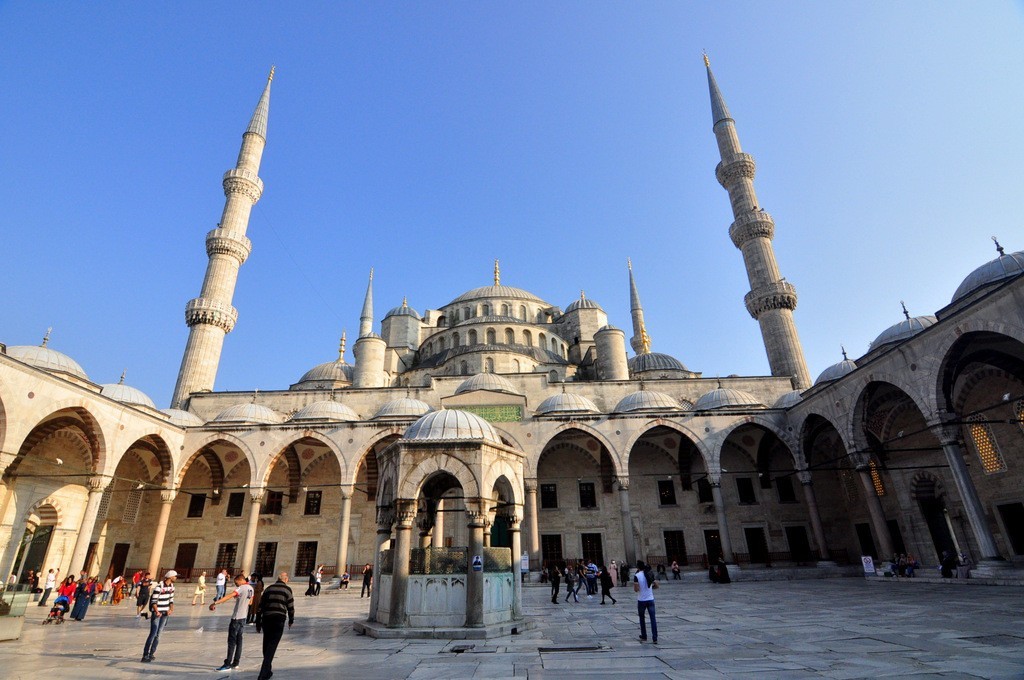 Location of the Blue Mosque on a map

When you leave the tram at Sultanahmet Tram Stop, you can reach out to Blue Mosque by walking through the nice park and the Hippodrome. The park can be seen in the below map. The green section next to Firuz Aga Camii (another small mosque which is located next to tran station.) 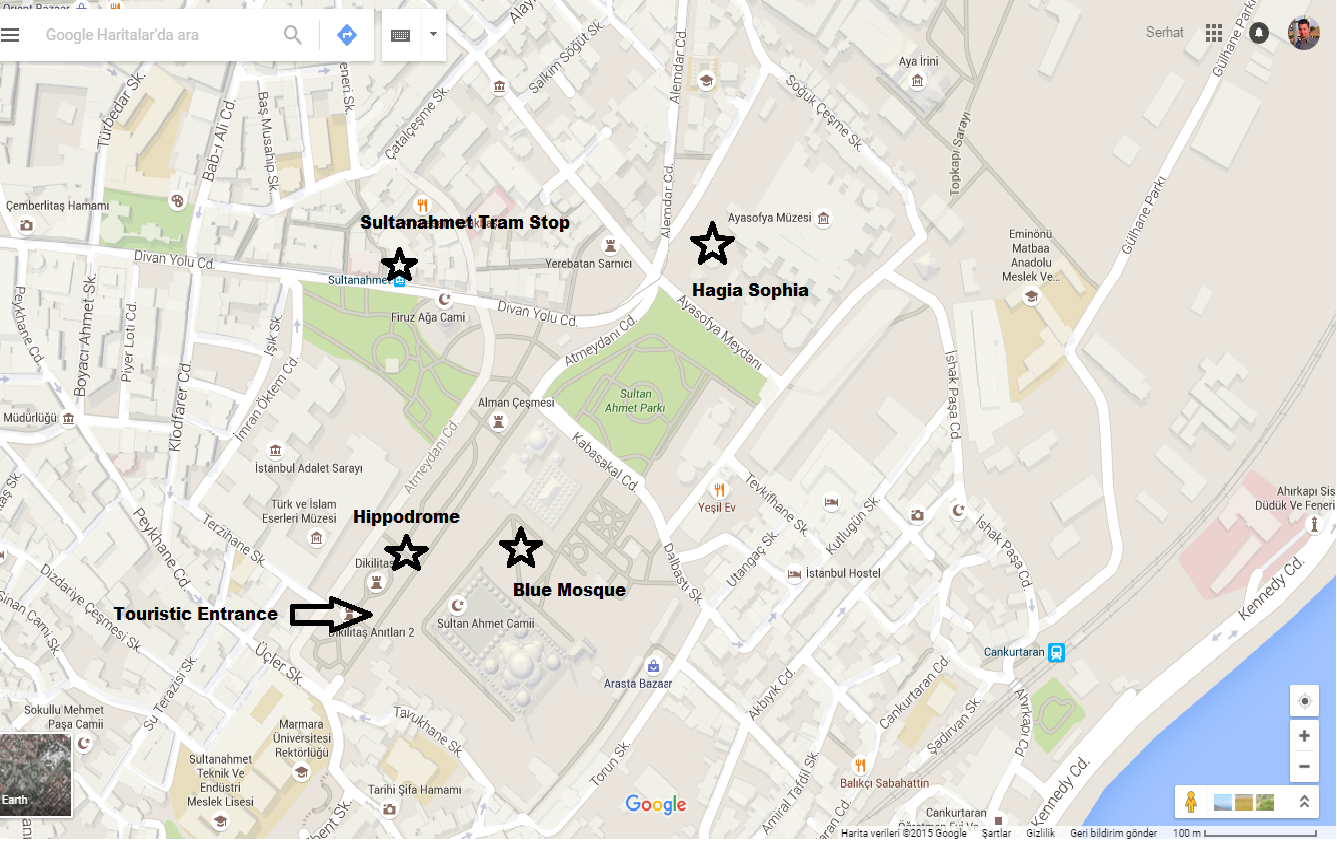 If you are looking for more information about the Blue Mosque, this blog post might be helpful. It gives you tips about the dress code and opening hours as well as the history of the building.

Where is the Blue Mosque Located in Istanbul?